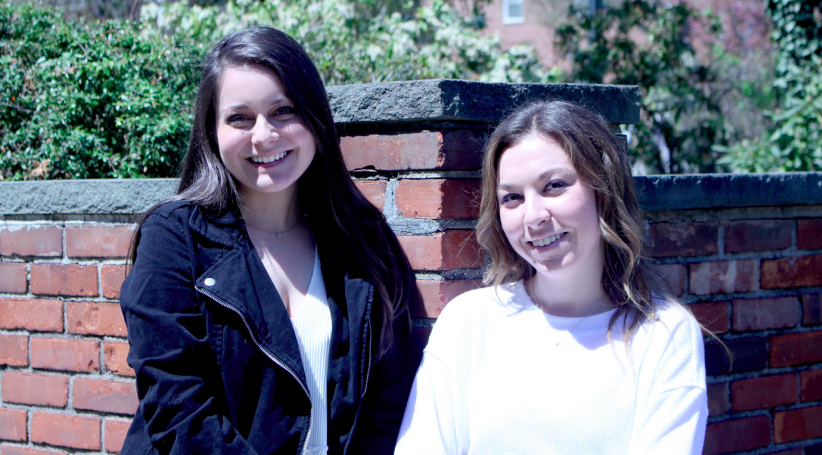 The co-valedictorians and salutatorian for the class of 2019 were notified on March 20 of their honors via email from Dean of Students Michael Berthel. This year there will be two valedictorians, Gianna Boscarino and Lauren Palumbo. The salutatorian will be Rebecca Kane.

Gianna Boscarino, who finished her degree in psychology in December 2018, was shocked to find out that she is co-valedictorian. Since finishing her degree early, she assumed she was ineligible for the title. “It’s really a big honor and a privilege,” she said.

“I have always prided myself on working hard at school and giving my all, almost to a fault, but this was something I certainly didn’t ever expect.”

Boscarino balanced her studies with a part-time job at the Developmental Disabilities Institute (DDI) as a teaching assistant for their Center for Autism beginning in her sophomore year. But time- management wasn’t always her strong suit. The most challenging thing for her was knowing how and when to ask for help. “When I first started school, I wasn’t great at balancing at all. I was getting really stressed out really easily,” she said. But she learned there is no shame in asking for help, and utilized resources on campus to get herself on the right track.

Her proudest moment of her collegiate career was in her freshman spring semester, when she became a peer mentor.

Boscarino and her fellow peer mentors organized a team building game event with the Autism Program at the Brookville Center for Children’s Services as part of the Post 101 service learning project. “Education, awareness and, most importantly, inclusion of individuals on the autism spectrum has always been something I have really become passionate about and I believe our project really helped get some of those messages across,” she said.

Boscarino started a full-time position with DDI in January 2019, working as a teaching assistant in a preschool autism class in the mornings, and then in a middle school age autism classroom in the afternoons. “It’s been such an honor working there and getting to see the kids really succeed and believe in themselves when they’re backed up by the all the right kinds of support,” she said. She hopes to get a doctoral degree in school and community psychology, and to continue her work with children with autism.

Lauren Palumbo, a digital arts & design major, said being named co-valedictorian was surreal. “I still need someone to pinch me,” she said. Palumbo read the email minutes before going into work and was overwhelmed with emotions.”

Being named co-valedictorian was a surprise to Palumbo, who struggled with school most of her life. She has many people to thank for her success. “I wouldn’t be here if it wasn’t for my amazing professors— Professor Conover, Professor O’Daly, Professor Aievoli, and Professor Del Rosso— and my amazing parents and friends that encourage me to work hard every day. Thank you from the bottom of my heart to everyone that’s supported me and gotten me to this point today,” she said.

Balancing school with two jobs, an internship with the marketing team at the Tilles Center, and being a member of the kickline team was a challenge for Palumbo. With a crazy schedule, she said that keeping herself busy helped her move along. “I think learning time management and making the most of your time between classes to get work done in the library is key,” she said.

Some of Palumbo’s proudest moments at Post were her Graphic Design Senior Exhibition and when she received awards in Excellence
in Digital Arts & Design and Academic Excellence. “Both are extremely proud moments and pushed me out of my comfort zone to publicly celebrate my work,” she said.

“I am so grateful to be co-valedictorian and to represent my graduating class,” Palumbo said. “Congratulations to my co-valedictorian, Gianna Boscarino, and my friend, Rebecca Kane, salutatorian, as well as the whole Class of 2019.” Palumbo advises the underclassmen to “work hard and stay humble, because the possibilities for accomplishments in life are endless.”

Palumbo is looking forward to some much- needed relaxation and a trip with her best friends after graduation. “I haven’t had the opportunity to travel much, so I plan to travel before promptly starting a full-time job,” she said. Palumbo will be working as a designer in New York City at an agency, a publisher, or any other company that catches her interest.

Rebecca Kane, a digital arts & design major, said she was both nervous and excited when she found out she was salutatorian. “I did not believe it at first, I had to keep rereading the email,” Kane said. “I never imagined being one of the top three.”

Kane credits her success in school to her skills in organization. Over time, she was able to manage school, a job, being a member of Alpha Xi Delta, working two internships at the GRO Agency and a small start up company, Impish Lee, and socializing with family and friends by prioritizing her time. “I had to step back and write everything down on my planner to get a sense of where I had the time, or if there were conflicts, which one took priority,” Kane said.

Kane is most proud of her Graphic Design Senior Exhibition. “Seeing all my hard work over the past four years hung on the wall was surreal and very exciting. It showed how far I’ve come and how much I’ve grown as a designer,” she said. Kane will also receive an award for Excellence in Digital Arts & Design on May 1.

Of the many hurdles she’s faced throughout her college years, Kane says that now is the most challenging. “As I prepare for graduation and seeking a job, everything I have prepared for the past four years is finally here,” she said. She has much work to do, with finalizing her resume, portfolio and cover letters. “It is beginning to set in that my life as a student is complete in just a few short weeks.”

Kane advises undergraduates following in her footsteps that, “You do not have to be the most outgoing person to be recognized, hard work never goes unnoticed.”