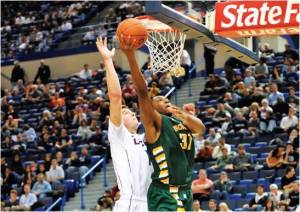 The men’s basketball team made it four wins in a row on Saturday, December 8, when they knocked off the Dowling Golden Lions with a score of 77-67 and then defeated the Felician College Golden Falcons 90-81 on Monday, December 10.

LIU Post quickly jumped on the scoreboard, grabbing a 22-12 lead just seven minutes into the first half. But the Golden Lions responded by going on a 12 -2 run to tie the game at 24 off a layup from Corwin Austin. The Pioneers grabbed the lead again, eventually pulling to a nine-point lead, highlighted by a stretch of scoring from freshman guard Dillon Burns, senior guard Billy Butler, Clayton, Williams, and Alle?an. They ended the half with a seven-point lead.

Carberry helped the Pioneers get off to a quick start in the second half. A three-pointer less than a minute in gave his team an 11-point lead. LIU Post controlled the second half and extended their lead to the largest margin of the afternoon, with 1:57 left in the game, when senior guard Jonathan Kohler scored to make 75-59.

The Golden Lions cut the lead down to eight with 18 seconds left in the game, but two free throw shots by Kohler nine seconds later sealed the 77-67 win for the Pioneers.

On Monday night, a 27 point performance by junior guard Jonathan
Kohler helped lead the Pioneers to a come from behind victory over the Golden Falcons.

Kohler was one of four players on the team who scored in double digits. Allen scored 15 points, Carberry contributed 20 points and Tyuan Williams put up 10 points. As a team, the Pioneers shot 40 percent (27-66) from the field and 33 percent (7-21) from behind the arc.

The first half was a tightly contested battle and saw the lead change five different times. And the game was tied three times in the half. By the time the two clubs went to their respective locker rooms for half time, the Golden Falcons had gained a 46-34 lead over the Pioneers.

The second half saw Felician College expand on their lead 17 in the opening three minutes of the half, off points from Anthony Green and Will Thompson. But the Pioneers began to respond.

Kohler went on a 7-0 run with about 15 minutes left in the half, to cut the Golden Falcons lead to just seven. Buckets from Allen and Charles McCann cut the lead to four. And with 11:47 left in the half Carberry tied the game at 59 off a layup.

The Pioneers would hold on for the 10-point. 91-81, win over the Golden Falcons. The win moves LIU Post’s record to 4-3 overall and extends their winning streak to four. The Pioneers next game is Sunday, December 16, against Bloomfield College at 3:30 p.m.