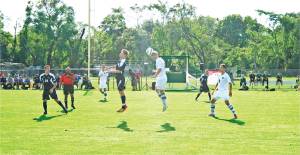 The LIU Post Pioneers men’s soccer team remained undefeated this past week. The boys defeated rival, Dowling College (4-1), on Wednesday September 19, and followed that up with another win against Roberts Wesleyan on Sunday September 23, by a score of 3-2. The Pioneers, who are currently ranked third in the nation, move to 8-0 on the season and 3-0 in East Coast Conference play.

During the matchup against Dowling, the Pioneers jumped onto the board just 55 seconds into the game when freshman midfielder Per Forgaard scored off a cross from junior forward Cemil Turan. The Pioneers repeated the play in the ninth minute with Forgaard and Turan switching roles. Forgaard played setup man for Turan to make it 2-0 in favor of the Pioneers.

In the 14th minute, sophomore forward Eivind Austboe scored unassisted off a free kick from 20 yards out. The Pioneers added its fourth goal of the match in the 60th minute as Turan scored his second goal of the game off a pass from senior forward Andreas Olson.

The Pioneers gave up the only goal of the game in the 77th minute, but that would be all as the Pioneers took the game easily 4-1. Junior goalkeeper Marco Jorgensen made three saves in the win, and LIU Post outshot Dowling 21-9.

LIU Post capped off a successful week with a victory over the Roberts Wesleyan Redhawks. Turan had another two-goal game, but it was a match that saw the Redhawks score the game’s opening goal.
Sophomore forward Stephen Stewart scored for RWC in the game’s opening ten minutes on what would be their only shot of the half. The Pioneers answered back five minutes later as graduate mid-fielder Bas Beverwijk headed a cross from junior back Eirik Bjoernoe to tie the game at one.

The Pioneers came out of halftime looking to break the tie and they did just that. Turan netted his first goal of the contest in the 49th minute to put LIU Post up 2-1. Fifteen minutes later, Turan scored again to give the Pioneers a two-goal cushion.

However, the Redhawks would not go down without a fight as sophomore forward Michael Cunningham scored in the 83rd minute to cut the lead to one. The Pioneers were able to hold off their opponent to secure the eighth win of the season. LIU Post outshot RWC 24-3 in the win and sophomore keeper Mathias Spinnars earned his first win of the season.

The next game for the Pioneers is on the road on Saturday, September 29, against the Saint Thomas Aquinas Spartans (2-2-2).