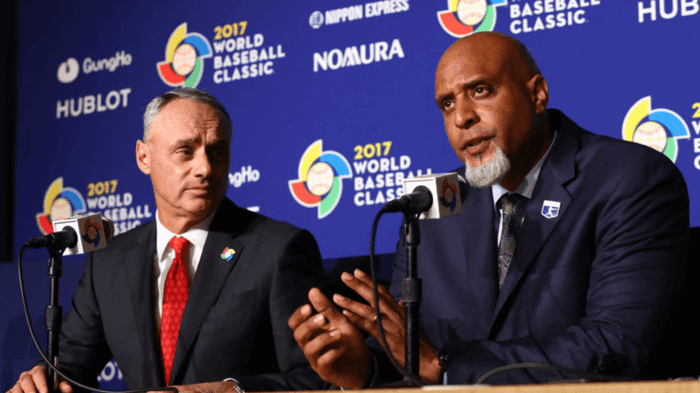 On Thursday, Dec.  2, 2021, Major League Baseball announced they were locking out the players. This is due to the ending of the collective bargaining agreement (CBA) that expired the day prior.

This is nothing new, as CBA contracts between the league’s owners and the Major League Baseball Players Association(MLBPA) are negotiated roughly every five years. Typically, negotiations for a new CBA are underway while the old contract is still in use, and the new CBA can go into effect immediately when needed. However, the owners and players union have yet to agree on terms for a new CBA, ultimately leading to the lockout currently in effect.

This is the first time since 1994 that a work stoppage has occurred in the MLB. In 1994, the players went on strike mid-season, ultimately leading to the season being canceled and no playoffs or World Series held.

As of now, no free agent signings can occur, players cannot use any team facilities, and players are not allowed to talk with anyone who works with the league or anyone with managerial/upper management status from any team.

Spring Training is set to begin less than one month from now, on Feb.  26. If no deal is reached, games will be delayed. If the lockout continues to last into March, it will force a shortened MLB season until both sides agree on a new CBA.

From what it looks like currently, league owners want a lower luxury tax threshold, which would force teams to spend less on players each season to avoid penalties. Small market team owners in particular have demands to fit their desires. This includes more revenue sharing among owners, which would allow small-market teams to acquire more money from teams in more favorable markets. They would also like to expand the playoffs to 14 teams, making it a more competitive playing field for teams that spend less.

On the other hand, players want none of these rule changes, as they feel it would cause teams in all markets to spend less overall and force their salaries down. They would also want to raise the minimum league salary of $570,500 and make it easier for players to enter free agency.

MLB commissioner Rob Manfred has expressed interest in a pitch clock, which he feels would speed up the pace of play. However, the MLBPA feels this is unfair to pitchers who have a set style they have used their entire lives. Other potential rule changes to be discussed are a universal designated hitter (DH) in the National League and the possibility of an automated strike zone to call balls and strikes.

Junior digital art and design major Anthony Hines is a lifelong Yankees and baseball fan. Hines is unhappy with what is currently taking place.

“I think the lockout is ultimately ruining the experience for fans who love the sport. Leaving fans in the dark is not good for the sport,” he said.

Hines believes the players and the Players Union should be more reasonable in their negotiations.

“In my opinion, I think the players should shut it. You already make enough money as is. Let’s just get to playing games already,” he said. “It’s ridiculous that we as fans have to wait this long.”

Hines would like to see some major changes coming to the sport once both sides agree upon the new CBA.

“I would love to see expanded playoffs as well as a universal DH, which I definitely expect to be a part of 2022,” he said. “I also wouldn’t be surprised if we see some big rule changes going forward.”

Sophomore adolescent education major Ryan Kaim is hoping to enjoy a baseball season as a fan of the Mets after all the quick free agent signings and player acquisitions pre-lockout.

“This lockout is frustrating and puts a lot of fans in limbo who await the beginning of spring training and the transactions involving the biggest available free agents,” Kaim said.

Kaim would like to see more negotiations coming from both sides.

“I believe both sides have their own issues I disagree with, but I believe the players are more in the right, the owners have come across as greedy and unwilling to compromise while the players’ demands seem to exceed what is truly possible,” he said.

“I believe the CBA needs to focus on tanking. All teams should be dedicated to their fan bases, willing to do whatever they can to field a competitive team,” he said. “Alongside, I believe increases in minor league salaries are warranted with the conditions they are given.”

Kaim is excited for all the free-agent signings and trades that are to come immediately upon the new CBA agreement, as teams will rush to fill their rosters before the season starts.

“I expect a raging hot stove once free agency comes back to life as many are looking to head into spring training with the pitchers and catchers report coming very soon,” he said. “I believe the changes will resolve some matters. However, I believe we should be concerned with the relations between the MLBPA and MLB as this lockout signifies a wide gap in ideals.”

Kaim is certain that no matter the end outcome, this will be a memorable moment in time and could set a precedent for how the league and the players view each other from here on out.

“The lockout changes the landscape in that with the reforms made, the sport from top to bottom will have mostly improved and modernized to the needs of the players,” he said. “I just fear that the lockout signifies potential future outcomes similar to this or the 1994 season when the next CBA expires.”