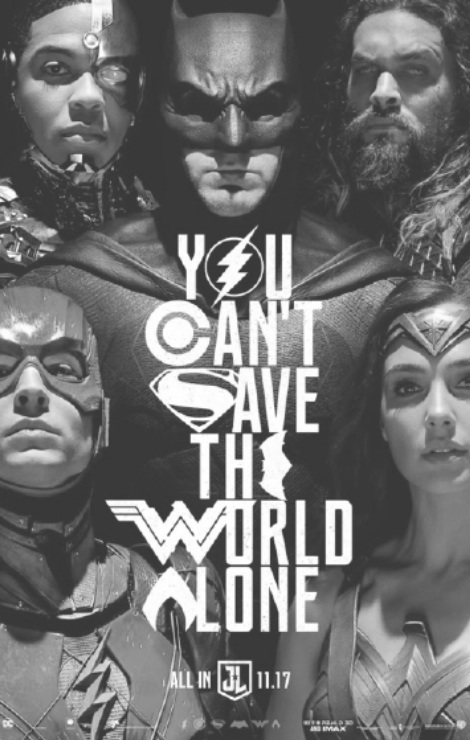 Director Zack Snyder re-unites the Caped Crusader, Batman and the Man of Steel, Superman, with other heroes after last year’s disaster, “Batman V. Superman: Dawn of Justice.” This time, Snyder brings in, The Flash (Ezra Miller), Aquaman, (Jason Momoa), Cyborg, (Ray Fisher) and Wonder Woman, (Gal Gadot) for the new movie, “Justice League.” However, can these heroes save the day? Snyder has undoubtedly been the most hated director in the DC Universe in recent years. He made the world’s greatest heroes and heroines look like the worst in “The Man of Steel,” when Superman ends up killing General Zod. Superman isn’t known for killing his enemies, so it was a bad idea to have him kill in the first movie. “Justice League” starts off at night showing Batman on patrol in Gotham City. Meanwhile, Superman is still dead, there’s a bomb threat in Paris and a talented football player has been turned into a machine.

Some heroes including Aquaman, Cyborg and The Flash, had their debut on the big screen. Between Snyder’s script, Momoa’s stature and the reputation the actor gained from his role in HBO’s hit series, “Game of Thrones,” Aquaman is a complete beast.

Cyborg’s story in the film starts off slowly, as Victor Stone, a young man who had a bright future in football is already half man, half machine hiding from society in his father’s apartment. Eventually, the strong use of special effects and Fisher’s voice, allowed Cyborg to play his part for both the team and the movie.

Popular character The Flash is conveyed differently from Grant Gustin’s character on The CW’s show, “The Flash.” Miller’s character is a lot more childish and overall annoying. While The Flash is supposed to be childish, Snyder’s scripting for him seems like overkill to the point where his portrayal of the character is more of a highly-caffeinated child than a hero.

Gadot returns as Wonder Woman, and her performance is just as great as it was in this summer’s “Wonder Woman” movie. This time, more of the hero’s abilities are put to the test from deflecting bullets with her “bracelets of submission” to using the “lasso of truth” to interrogate the adversary.

Affleck’s portrayal of Batman is absolutely perfect. Snyder was able to bring to life the Batman seen in the comics by his use of gadgets and combat. In previous Batman movies, such as Christopher Nolan’s “Batman,” the character’s combat is very stiff; his grappling gun was nowhere to be found, but Snyder brought everything about the hero to life. Affleck’s Batman is very similar to comic writer Frank Miller’s interpretation of the original character in the story arc, “The Dark Knight Returns” with his stature and suit.

Superman is still Snyder’s Superman, however; audiences finally see what Superman can do in the movie instead of just fly and cry. Ever since “Man of Steel,” fans have been waiting to see Superman’s heat vision, X-ray vision, cold breath and super speed. Snyder’s Superman in the past was conservative as he was reluctant to use anything other than his ability to fly which defeated the purpose of his name.

The film’s plot is almost too simple which left critics and fans angry. However; there are three powerful devices called “mother boxes,” and an unfamiliar main antagonist Steppenwolf is after them with his cliché plan to destroy the world.

“Justice League” struggles to build up suspense since almost every event is predictable and there is too much computer-generated imagery in the wrong places. Snyder took a risk by using all of these new heroes, and it was just too soon. The Flash, Aquaman and Cyborg needed their movies first. Aquaman is releasing in 2018 while Flashpoint and Cyborg aren’t hitting the big screen until 2020. “Justice League” is currently playing in local theatres.