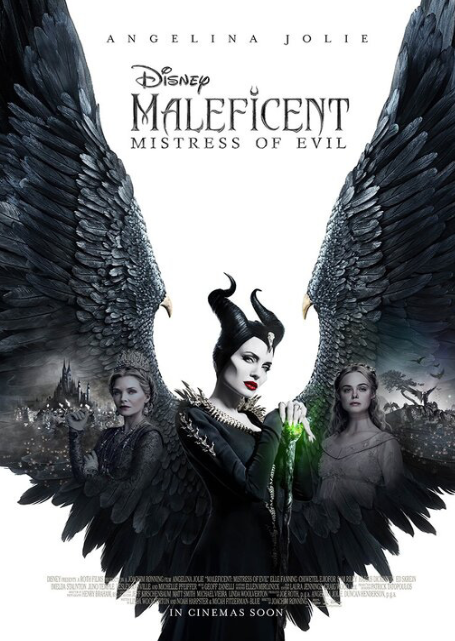 “Maleficent Mistress of Evil” was released on Oct. 18, 2019. Maleficent is portrayed as the villain in the fairy tale Sleeping Beauty. However, Maleficent’s character takes a turn for the benevolent in this adventure where she figures out where she came from, stops a war and saves the Moors.

In addition to that, Maleficent’s goddaughter Aurora, gets engaged to Prince Philip and she gains new family, including an evil mother in law, Queen Ingrith, who wants to start a war against the Moors. In the end, both Aurora and Maleficent learn about family and how adopted family is equally as important as family bound by blood.

This film is filled with dark imagery and the depiction of Maleficent as evil. Yet again Disney surprises us and continues to show her as a heroine.

The CGI (computer generated imagery) in this movie is absolutely breathtaking as Disney shows us lifelike landscape and makes the Tomb Bloom flowers appear to glow. Also, the CGI brings some of the smaller characters to life as well, such as how the quills on the small hedgehog fairy character move with lifelike realism. When the CGI combines with how the rest of the film was directed, it makes you feel like you were a fairy watching everything go down. It feels very organic as it further immerses viewers into the movie.

The storytelling is absolutely beautiful, while the dialogue is minimal. It shows the relationship between characters without having to flesh out a long back story. The dichotomy of words also makes this movie far more realistic, as opposed to a traditional Disney movie which usually has a large monologue explaining things. Without those monologues, it makes this movie a lot easier to follow and more memorable.

Angelina Jolie, who plays Maleficent in the film, makes an amazing performance with her naturalistic performance style. She adds to the character Maleficent by doing simple things. For example, Jolie, practices smiling when she meets her daughter’s potential mother-in-law, Queen Ingrith. It’s that moment where we see that Maleficent, despite her better judgement, wants to make her goddaughter happy. Jolie attempts to make Maleficent seem more relatable as Jolie picks a struggle most people can relate to: trying to impress family.

Michaela Fox, senior musical theatre major saw the film and had strong thoughts about it. “I remember the movie justifying Maleficent’s behavior. It successfully displayed the woman we all know as a classic villain as someone we could sympathize with,” she said. “I remember the movie bringing awareness to how we beautify or romanticize stories, especially throughout history for instance, and ignore the evil of the people we label as the ‘good guys’, even when it stands as the potential motivation of the evildoers.”