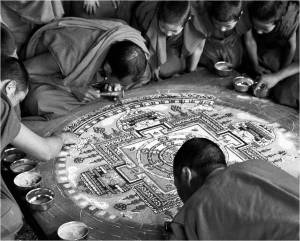 There is peace for 99 minutes. The world outside our living room is one struggling with conflict and harmony, yet for almost two hours we are witnesses to the wonders of the world. We find amity—we find a flawless rhythm in themes we are all too familiar with.

The documentary “Samsara,” written and directed by Ron Fricke, who has also directed the similarly-styled 1992 nonverbal film “Bakara” and worked as the cinematographer for the film “Star Wars II: Revenge of the Sith,” takes the viewer on an intimate, guided trip through twenty-five countries while exploring life and death, age-old traditions, and the ever-present cyclic representation of time.

Fricke developed these themes using a carefully customized pallet of stunning visuals and calmingly eclectic mix of natural sounds, oriental and tribal chimes with the ever-present calming rhythm of meditative music. Literally, no words can describe watching nearly a thousand male prisoners clad in orange jumpsuits carry out a flawless dance routine in front of what is presumed to be a female warden.
However, Fricke lacked a clear storyline and memorable themes. Yet, what he lacks here he makes up in composition. The screen blackens, but then ash and red, hot magma careen across the screen and you know you’re witnessing a volcano erupt and strangely it seems as if this is the first time you’ve seen such a thing. You almost feel like sweat is dripping down your forehead as if you were there.

Another noteworthy characteristic is Fricke’s use of juxtapositions. He compares an assembly line spewing out product after product with that of endless consumer waste. He pairs an image of a machine wrangling up cow after cow with that of an overweight group of people indulging in beef burgers in a fast food restaurant.

Perhaps the film, which was criticized by The New York Times for lacking a specific message, is about the balance and parallels of life. Where he shows land, he shows water. Where he shows life, he shows death. When we see a stereotypical image of tribesmen, we see aberration in the form of a sweet bond between a daughter and her cumbersomely tattooed father.

Perhaps it was Fricke’s idea to transform these perceptions and enlighten our psyche by showing us common occurrences on different ends of the spectrum. Take for example death. He shows an old man, his life and the color of his flesh muted by death. Scenes later, he shows what appears to be a dead newborn and then he shows a family grieving over a dead boy encased in a gun shaped coffin. Do we only associate death with the elderly? Maybe, this is Fricke attempts to change this questionable perception.

Maybe, Fricke’s message was specific—maybe, it was that all things begin and end and this cycle repeats itself endlessly. In the beginning of the film, we witness Tibetan monks creating a Thangka, which is an artwork that depicts the wheel of life. In order to create this particular Thangka, the monks had to tediously blow color sand grains through a small pipe. Once it was completed, the monks quickly reviewed it and then destroyed it. So, it is implied that they will do this again and again.

Despite its lack of a concrete and obvious message, many ideas were insinuated. Perhaps, this was Fricke’s point. If nothing else, “Samsara” forces you to think about the true meaning of life and living.
“Samsara,” which was shown in 2011 at the Toronto International Film Festival and in August 2012 in 60 theaters across the United States, is now available On Demand and on DVD.