Moving From Email to Gmail 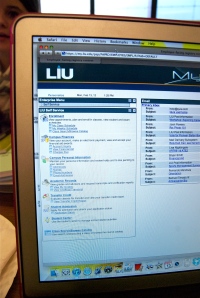 A week after LIU Post was officially launched, students’ email accounts will now be undergoing a change as well.

Students’ MyLIU email accounts will be switched over to Gmail, with a scheduled go-live date of Monday, February 20th.

The switch is being made to provide students with more computing power, more storage space, and Google Apps for Education, said Nancy Marksbury, Deputy CIO of Information Technology. The campus’ Information Technology office sent out an email to every student’s LIU address on Monday, February 6th, informing everyone of the change.

LIU accounts will be down from February 17th through Monday morning, so IT can migrate emails to the new server.

Students will still be able to access their emails through www.my.liu.edu, and usernames and passwords will stay the same. However, through this new site, users will be able to get to Blackboard directly and reset their account passwords online instead of going to the IT office for to do so. Students will also be able to access their emails separately from the student center. This means that when you login, a typical Gmail interface will come up with only your emails as opposed to the various financial aid, enrollment, transcript and other LIU links that show up now.

Once IT has finished moving emails, it will begin to work on adding a few other special features to students’ accounts. Students will be able to make their own Google+ accounts and access it from their student centers. Also, with the Google calendar feature, the students’ class schedules will be automatically uploaded to it, so you can plan around your classes.

Senior Environmental Science major Brian Arons said that he is excited about the change.

“I don’t use my LIU account because it’s really slow,” he said, adding the thought that the Blackboard app and the separate mail option were good added features.

“I already have Gmail, and it’s not the greatest server,” she said. She also felt there are too many changes on little, unnecessary things and not enough focus on bigger issues around campus.

Despite the mid-semester timing, Marksbury said IT is not anticipating any problems with the migration. The IT team has been working hard to test the system to ensure no problems arise, she added.