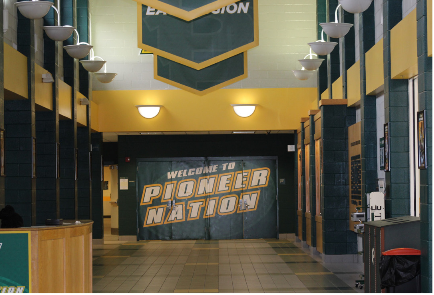 As the Post and Brooklyn athletic departments merge to become OneLIU, so will their school colors. The arrays of green and gold that drape across Post’s campus will soon become a distant memory, and shades of blue and gold will take their place this fall to represent a unified LIU.

Green and gold have given Post an identity for over half a century; they served as a base for building a sense of belonging among students and faculty they’ve been an expression of the Pioneer school spirit at sporting and recreational events. The Pioneer theme is everywhere: on the walls and furniture, in the tiled floor patterns, upon the banners aligning the campus roads, and printed on school merchandise, uniforms the gymnasium floor.

Some students are left wondering when the color changes will take effect and how much they will cost. Academic halls and athletic facilities will have to undergo renovations to reflect the merger. Freshman business major, Alec Salgado, is concerned about the transition.

“Since the colors are changing, it’s going to be a huge financial thing for the school. A lot of the buildings are going to be changed because we have a lot of green and gold stuff around. It’s everywhere. It’s going to be really hard,” he said.

The Pratt Recreation Center, where the merged athletic teams will practice, is saturated with Pioneer colors. According to Casey Schermick, director of athletic media relations, there are hundreds, if not thousands of items around campus consisting of green and gold.

“As time goes on, these items will be rebranded to match the new color scheme,” he said. “This will definitely be a rollout project that will be transformed over time.”

Schermick added that the new combination of colors is one of many ways to carry on the traditional spirit of each campus.

“LIU will be recognizable with accenting colors from both Post and Brooklyn athletic departments,” he said. However, he cannot confirm a timetable as to when it will be completed.

“During summer break each year, the gym floor is stripped down to the wood and refurbished. Once decided, the plan would be to make the color changes during this time,” Roy Fergus, executive director of facilities, said.

Blue and gold will eventually be reflected in all aspects of athletics, including signage and website design, social media and uniforms. Currently, the university is exploring options for a “unified apparel company” to outfit all athletic teams beginning in the fall, according to Schermick. New uniforms will be ready to wear for preseason in late summer. A new mascot, which has yet to be determined, will also receive blue and gold gear with a new logo, wordmark icons

It may not be as difficult for Brooklyn to make their physical changes, as their campus is a mere 11 acres in comparison to Post’s 322 acres. According to Brooklyn journalism major, Michael Chin, changes will mainly consist of painting over the old colors.

“The court at the Steinberg Wellness Center, where men’s and women’s basketball and women’s volleyball plays, was just redone with a fresh coat of paint in Summer 2017,” he said. “Of course, with a new mascot waiting to be officially announced, I believe they would need to fix the court again to replace the logo in center court with the new mascot.”

Brooklyn students also have an attachment to the spirit that the colors of blue, white and black bring to their campus, according to Chin; it’s reflected in student apparel and athletic wear. He said their bookstore has already debuting some new clothing reflecting the new colors.

Post’s bookstore will also undergo various changes that will occur over the summer break.

“Discussions are ongoing as to the extent of a makeover,” bookstore manager Jorge Lanas, said.

“The bookstore will continue to be an important proponent of LIU’s brand awareness to all current and prospective students,” he said. “Students should be excited to be part of this new venture in LIU’s history.”

But some students are disappointed in the change. Freshman Annalise Argento, a music education major, imagined herself in Pioneer colors since she committed to Post her senior year of high school.

The announcement of OneLIU and the changes that come with it, have disappointed Brooklyn students, especially athletes, according to Chin.

“Many students rather keep the current school colors of blue, white and black. Also, students very dislike the changing of the mascot and the Blackbirds should stay,” he said. “I wished university officials included the students’ reactions and thoughts before taking surprise action in changing everything.”

According to Schermick, the athletic department is eager to honor both campuses through a unified LIU.

“It was extremely important to the university, athletics, and administration to honor the traditions of both campuses when making the decision,” he said. “We as a department are very excited to see our stands filled with blue and gold as we compete at the highest level of competition.”