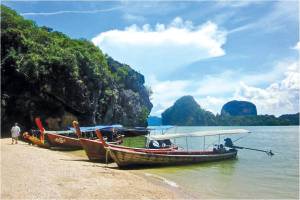 Located off the pristine Andaman Sea, Phuket is Thai¬land’s largest island and one of the world’s most popular beach destinations that offers a rainbow spectrum of spectacular vacation sights from blue lagoons and pink sunsets to orange-robed monks. The country’s main source of income is tourism, though agriculture also plays a key role. The island city made headlines back in 2004 after suffering from a tsunami caused by an Indian Ocean earthquake. The waves destroyed several highly populated areas in the region killing up to 5,300 people nationwide. De¬spite these difficult times, Phuket maintained their high standards and continues to be a booming cosmopolitan town that offers a multitude of affordable accommodations, as well as a variety of different shopping and dining destinations.

Airlines: Traveling to Phuket International Airport by plane can be somewhat of an ad¬venture for tourists coming from all over the globe. The trend is for many tourists to come through Bangkok catching domestic flights via Thai Airways, which run regularly through the day, seven days a week. Several other airlines fly to Phuket like United Airlines, Cathay Pacific, Asiana Airlines, and China Airlines. No airlines fly direct from United States to Phuket.

Hotels: With the well-known Thai hospitality, Phuket hotels services are guaranteed to be part of the holiday experience. From modest to majestic, from guesthouse to five-star resort, from beachside bungalow to city center hotel, accommodation choices are reflected by their differing prices. Popular hotels include Holiday Inn Phuket, Le Meridien Phuket Bach Resort, and Dusit Thani Laguna. Patong Beach, with its lush tropical land¬scape, is the oasis of calm that sits at the heart of one of Phuket’s most vibrant and popular areas, making it the perfect location for an enjoyable holiday with friends or family in an ultra-convenient location.

Attractions/Sightseeing: With its glittering temples, impressive scenery, idyllic beaches, and friendly locals, Phuket Island is immensely rewarding to those who take the time to explore its attractions. Renowned in the Kathu District is Patong Beach, the lively shopping and evening entertainment district that trans¬formed a quiet fishing village into a bustling town in a short period of time. From bars to live music to discos, cuisine from all over the world is available in its restaurants. Not to be overlooked is the fine bay and two mile stretch of beach that promises excellent swimming and snorkeling. Among the major attractions in the vicinity are Phuket Water-Ski Cableways, Kathu Waterfall, Loch Palm Golf Club and Tarzan Jungle Bungee Jump. At the northern end of Patong Beach is the wilder, undeveloped Kalim Beach, an ad¬venturous stop for travelers looking to get away from the crowds. Covering the northern half of the island, Thalang District has a number of attractions including Thalang National Museum, which has a display of ancient artifacts and exhibits relating to the famous 1785 Battle of Thalang. Also in the area is Wat Phra Tong, home of the golden statue of Bud¬dha that emerged from the earth many years ago. A must-do in Phuket is a walk in the old part of Phuket City, around Thalang, Dibuk, and Krabi roads. The beautiful architecture along these roads will take you back to the charm of a century ago. This area provides a less expensive alternative to the west coast beach resorts. Phuket Town is the administrative center of the island and offers a ton of things to see, including Phuket Aquarium, the Phuket Butterfly Garden and Aquarium, and the Phuket Orchid Garden and Thai Village.

Cuisine: Thai food, as exotic as it is, needs no introduction. Visitors to Phuket will be overwhelmed by the variety of food and dining experiences that awaits them. Phuket is especially acclaimed for its seafood, southern specialties such as curries with coconut milk, and the fantastic range of fresh fruits available here. For lunch, forget burgers, sandwiches, and chicken nuggets. Thailand has food that arrives just as fast but is much fresher and tastier such as Kway Tio (noodle soup), Pad Thai Goong (Thai fried rice noodles with prawns), Pad Kapow Neua (stir-fried basil with beef), Pad See Iew (noodles in soy sauce), and Kao Pad (fried rice with a choice of meat or seafood). One other “must try” while you’re in Phuket is Kao Niow with Gai Yang (sticky rice with barbecued chicken). Aside from the local food, you can find a range from Italian to Middle Eastern to Indian and Japanese cuisine. In addition, wine has become readily available with some restaurants now featuring creditable wine cellars. Places to eat vary from road¬side noodle stalls, air-conditioned restaurants, open air restaurants with great views, or fast food out¬lets. You won’t go hungry!