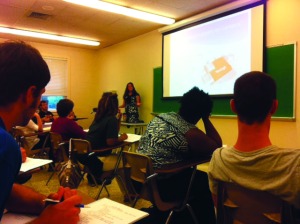 Hurricane Sandy and the nor’easter that followed caused LIU Post to close for a total of 11 days, including weekends. In order for students to complete their fall 2012 courses in full satisfaction with the New York State Education Department requirements, missed classes will have to be made up, according to Beth Carson, who works in Registrar.

New York State mandates a specific amount of contact (instruction) hours, explains Carson. For a three credit course, there must be 2,250 minutes of contact hours not including out of class work.
The rest of the fall semester’s academic calendar has been revised as well. Make-up classes for the hurricane will be scheduled on Fridays, Saturdays and during common hour. It will be up to the professor to determine which days and times will be used. Wednesday, December 12, will be a mandatory make-up day for classes.

The extra classes have been reported to add stress on some students. Jacob Maitland, junior business major, said, “I’ve had two rescheduled classes and one that really did me in.” Because of some scheduling issues, his parents are visiting him the week after Thanksgiving instead of during the break. His law class was rescheduled for a Saturday when his parents would be visiting. He said he reacted with “a lot of beeps, hash tags and stars.” The class is also expecting an exam that day. Maitland said that it was too personal to reveal his professor’s name; however, the professor allowed him to reschedule the exam for a later date so he could spend the extra time with his parents.

“Students should speak with faculty regarding any conflicts that they have with scheduled make-up classes,” Carson said. She added that if there are additional concerns made by the student that cannot be resolved by the faculty then they should speak with their chairperson or dean.

Some students understand the need to make-up classes. “It was a whole entire week of classes, that’s a lot of days missed,” said Joe Nicastro, junior criminal justice major. He added that it’s better than extending the semester.

Natalie Post, freshman finance business major, said, “Mine didn’t bother me, but if I had a Friday class, I might be mad.” She normally works during common hour and did not mind missing one day of work but still referred to it as money coming out of her pocket.

Softball players Kaci Hopkins and Nicole Hagenan, both criminal justice majors, were relieved that they did not have any rescheduled classes that interfered with practice. Their Earth Science class was rescheduled for common hour. “I’d rather have it at common hour because people have jobs and practices to go to,” Hopkins said.

“We can’t speak to how other colleges are choosing to fulfill their contact hour obligations. Additionally, not all Long Island colleges were closed for the same lengthy period that LIU Post was due to the consecutive storms,” said Carson.