Maria Emdal Otterlei’s alarm goes off at 5:15 a.m., she forces herself out of bed, tiptoes around in order not to wake her roommates up, before heading out into the cold. 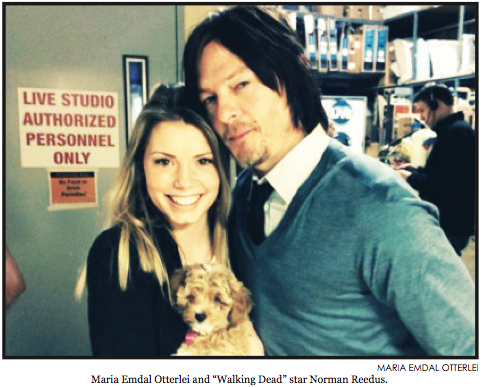 It is Thursday in sleepy Hicksville, but Otterlei is heading to the train that will take her to a significantly more eventful place – the city that never really sleeps at all.

Every Tuesday and Thursday, she interns at the local channel NBC 4. Her day starts at 7:30 a.m., and despite the early mornings, she explains that it is “absolutely worth it.” No wonder why: one of her responsibilities is to welcome, and take care of, celebrities and guests of the show.

Otterlei, who is originally from Alesund, Norway, came to New York in 2011. When she is not at her internship, taking care of celebrities, and getting professional experiences that most people could only dream of, she is finishing her senior year at LIU Post.

On this particular February day, she is about to welcome “Walking Dead” star Norman Reedus. As he arrives in the Visitors Center, she greets him, gives him a pass into the building, and takes him to the correct floor. Subsequently, she ushers him into the green room, and supplies him with food and coffee. When it’s airtime, she makes sure his microphone is on and follows him to the TV studio.

Working close to celebrities has been an unexpectedly friendly experience. “I had pictured some of the celebs [to be] arrogant, but most of them are very down to earth and kind,” she said.

Along with two interns from other New York universities, Otterlei manages a great part of the show’s social media, including Pinterest, Instagram, and Google+ accounts. And the possible competition does not bother her. “I have been an intern for two semesters now, so I’m more experienced than the other interns. I feel more confident and efficient this semester.”

Before getting the internship, Otterlei took the non-credit EEE course at LIU Post, which is designed to help students with resume writing, career research, and job interviewing. In addition, she had previous broadcasting experience from working at a newspaper and radio station back in Norway.

Despite her preparations and previous experience, Otterlei struggled to get an internship. That changed when a friend was offered the internship at NBC, declined it, and recommended Otterlei instead. “I went on a couple of interviews without getting anything, which was necessary because I learned from my mistakes. And that paid off when I finally got the interview with NBC Universal,” she said.

However, the exciting internship does have its downsides. “Commuting between Hicksville and the city takes a lot of energy. Sometimes I work over time, and don’t get home until 8 or 9 p.m.,” Otterlei said. “Considering when I have to go up in the morning, that’s a very long day.”

And the hard lifestyle calls for certain prioritizations. “I sleep in and do homework on the weekends, because the rest of my week is very hectic. One day, I was so busy that I forgot to eat for 11 hours,” she added.

Despite the hectic life style, Otterlei is happy to do it. “I had never in my most spectacular dreams pictured that this could ever happen. The internship has made me more optimistic,” she stated.

“I was always very shy and didn’t admit even to myself that I want to become a reporter. But if you don’t tell anyone, no one is able to help you reach your goal,” Otterlei advises students.

She also claims that people should learn from their mistakes. “Do not give up after one bad interview. Be yourself, but in a professional way, and soak up all the experience you can get,” she said.

Otterlei will be working at NBC until May 2014, and she hopes to get an entry-level job at the TV network afterwards. “However, the media industry in NYC is very hard and competitive,” she said.

As another day of exciting experiences, new celebrities and hard work comes to an end, Otterlei starts her long way home to Hicksville. Most likely she is tired, but perhaps also excited to get home and tell her roommates about her day with that guy from “Walking Dead.”