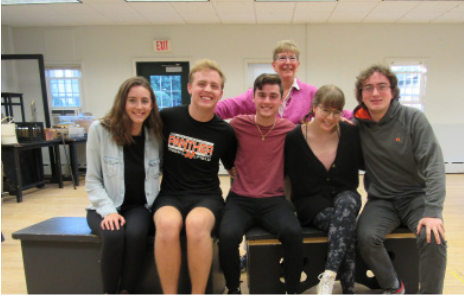 Post Theatre Company (PTC) will open its 2019-20 season on Oct. 2 with the play “Blue Stockings.” The plot follows the story of four women fighting for the right to graduate from Girton College at Cambridge University in 17th century England.

Janice L. Goldberg, the director of the production provided background. “Women attending Cambridge University weren’t allowed to graduate. They could attend but wouldn’t have degrees conferred onto them. All the men could graduate but women could not,” Goldberg said.

“Blue Stockings” has its fair share of action despite being a play about an intellectual debate. “It has all this intellectual leanings but there is also fights, dancing, drinking, romantic intrigue, a love ” Goldberg said.

Lee Metaxa-Rozenfeld is a junior musical theater major who plays the lead role of Tess Moffat in the production. Metaxa-Rozenfeld described a bit about her character “[Moffat] is very curious, [and is] attending to become an astrophysicist. [She] firmly believes she has the capacity to do that, entranced by night sky and organization of stars.” Metaxa-Rozenfeld said.

Focusing on her education, Moffat is met with a decision she never thought she’d make. “She has to choose between knowledge and love, never did she think that would be an option. She hits a wall and feels stuck.” Metaxa-Rozenfeld said.

Matthew Sporrer is a sophomore dual major in theater arts and international relations who plays the role of Edwards.

“Edwards is a student at Trinity College at Cambridge, he is going to be a geologist, he loves school but is kind of a punching bag for the other guys,” Sporrer said. This treatment comes as a result of his wanting to be included. “The other boys bully him and do things that go over his head, [and] he understands what’s happening though, they take advantage of him wanting to be a part of the group,” he continued

In terms of the debate about women graduating, Sporrer’s character remains neutral. “He doesn’t like choosing sides, but he believes women are people,” Spor said.

Francesco DiFlora is a sophomore musical theater major who plays several roles in the production. His main role is Ralph Mayhew.

In regards to Mayhew, “He is one of the students at the school, student not as against the women being there as the other boys, interest of Tess.” DiFlora said.

Irene Poole is a junior musical theater major who plays Miss Blake. “She is a teacher at Girton [who] teaches moral science, [is] very progressive, [and stands at the] front lines of the women’s suffrage movement which is happening at the same time as the graduation movement,” Poole said.

David Kemp is a junior musical theater major who plays several roles in the play, mainly Dr. Maudsley. “He’s a leading psychiatrist of the time, at to promote ‘Sex in Mind and in Education,’” Kemp said. “[He] gets stuck in challenging debates on degrees for women, and he takes a stand [on] why they shouldn’t have degrees.”

The view Maudsley takes is a common one of the time that is based on the science of the period. “The theory is that humans have a limited amount of energy, and can only do so much,” Kemp said. “If a man does physical labor, it’s hard for them to do mental labor; if a woman has gone through childbirth and being a mother, then it is impossible for them to get an education since they already expended their energy.”

This concept was considered dangerous for the world, according to Kemp. “[In having] beliefs that if women get it will affect their body so they won’t be able to have motherly instincts, would eventually be the downfall of society,” Kemp said.

Goldberg provided further context. “It was a prevailing opinion of the day, back then this was a very common belief they were going to stay home and take care of everyone, these women being there is an affront to everything they know. Nobody’s evil,” Goldberg said.

“The playwright makes a point at the beginning to say that the men aren’t evil, this is genuinely what was believed, and the men thought it was unhealthy for ” DiFlora said.