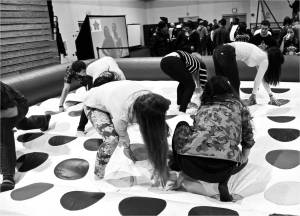 Pratt After Dark, the indoor carnival held at Post each February in the Pratt Recre­ation Center, featured various free activities for students. Recreational Sports, Residence Life, Student Life & Leadership Development, Dining services and the Division of Student Success sponsored this event. The festivities kicked off on February 1 at 10 p.m.

Activities and features included, eat­ing contests, prizes, and music by WCWP, a blow-up Twister board. There was enter­tainment lined up the entire night. A small ice rink was installed in the center of the gym for those daring enough to partake. Complimentary food and beverages were available for attendees. A variety of options were offered including nachos, pretzels, ice cream sandwiches and an assortment of fountain drinks. There was also a smoothie stand and a popcorn stand.

Students of all ages mingled and got to know one another while others brought friends from elsewhere as guests. “It’s my first time being here and I think it’s a great pro­gram. It was so much fun. I met a bunch of new people, and the free food is never a bad thing,” said freshman Health Management major Sarah Hecht.

Hecht recently transferred from the University of Towson in Maryland, and ap­preciated the opportunity to meet people from the school. “I had heard this event was popular and a lot of people would show so I figured why not. It was worth it too because I got to meet girls from sororities I’m inter­ested in joining.”

Just like Hecht, many other students in attendance turned up in order to meet and interact with other students. Freshman Me­gan Draghi, a transfer student from Mount Saint Mary College in Newburgh, N.Y., said that she heard about the event from a friend, who told her it would be a great way to network and meet other students. “It definitely is [a great way to meet people]. I ran into people from my classes that I’ve never spoken to before and even got to meet the people they were with,” said Draghi.

The event went on until 2:00 a.m., giv­ing students time to exchange numbers and chat. By the end of the night, some people were worn out. “We were all so tired,” Hecht said, “but it was worth it! If you didn’t get to go to Pratt After Dark this year, definitely go next year! It was a great time.”