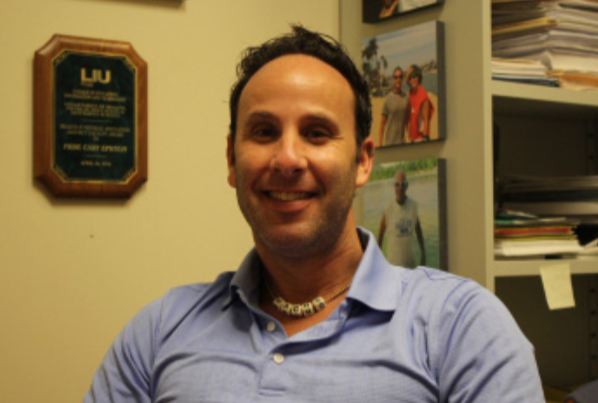 Cary Epstein, professor of health and physical education, is the coordinator of the teacher preparation program within the department
of teaching and learning. An adjunct professor when he first came to Post in 2011, in fall 2018 Epstein was hired as the only full-time faculty in the department of health, physical education, and movement science, which has since been combined with several other departments within the college of education under the new title department of teaching and learning.

“I love teaching at LIU. I have had nothing but great experiences with all of the students in my classes. It is my hope to motivate and inspire them to be the best versions of themselves,” he said.

Epstein spent his freshman year as an undergraduate student at Post in 1998 before transferring to the University of Albany to complete his bachelor’s degree. “I loved my time as a student at LIU and even though it was short lived, when I walk around campus, I have fond memories of my first year in college. I even still have my CW Post ID card.”

Epstein’s job as a professor allows him to follow his life-long passion for health and fitness. “I always thought being a college professor would be a really amazing job, but it wasn’t necessarily on my radar,” he said. After obtaining his master’s degree in health education K-12 from Hofstra University, Epstein taught health for seven years at both Hewlett High School and John Adams High School. During that time, he taught his first college level course on substance abuse at LIU at night. “When it was all over, I knew this was the perfect career for me. It took awhile to get here, but I finally landed that full-time job in the fall of 2018.”

Epstein was inspired by his late grandfather Dan Lurie. “He was a famous fitness pioneer and founding father of bodybuilding. His entire life was focused on health and physical fitness,” Epstein said. “He held world records in push-ups, pull ups and parallel dips to name just a few. He trained some of the world’s most famous bodybuilders and coined the slogan ‘Health Is Your Greatest Wealth.’” Epstein seeks to continue Lurie’s legacy of completing seven full distance marathons and being
a four time Ironman Triathlon finisher. “This September [8] I [will be] racing an eight-stage triathlon called the SOS [Survival of the Shawangunks] Triathlon and in October 13 I will be running the Chicago Marathon,” he said.

Epstein advises students to focus on their health. “Everything you do now will 100 percent affect you in the future. It’s a hard concept to grasp when you’re young and you have no health issues. Look at what you eat, who you hang out with and how you feel about yourself. What kind of lifestyle do you live? All of these things will make and shape your adult lives, who are you now and who you will become in the future,” he said.

Epstein teaches a course on human sexuality. “It’s so much more than just sex or being straight versus gay. I have had students come to this class thinking they know it all and have left 14 weeks later, thanking me for opening up their eyes to understanding human sexuality,” he said.

Epstein, who teaches a course on substance abuse, sees the vital problem in drug and substance abuse. “Unfortunately, even with the use of the internet at our fingers and learning about the dangers of drugs and drinking early on in public school, the amount of young people finding themselves addicted to various drugs is alarming. 1400 college kids across the U.S. die a year from alcohol poisoning alone,” he said.

Outside of campus, Epstein is an emergency medical technician in the NYC 911 system. He works for Lennox Hill Hospital, and he works eight-hour, 12-hour, and 16-hour shifts on the Upper East Side. He is also the EMS Lieutenant at the Hewlett Fire Department. “It’s a juggling act and I can always use some more sleep,” he said.

Epstein is one of the co-founders of the nonprofit organization M.A.C.H.O. (My Actions Can Help Others), in honor of his late father Scott Epstein. “The M.A.C.H.O. Foundation aims to inspire people to think with their hearts. We believe empathy and compassion are core values that should be at the forefront of our society, and it is our contention that every one of us possesses what we call ‘M.A.C.H.O. Power,’” Epstein said. M.A.C.H.O. promotes its vision of ordinary superheroism through advocacy work, school assemblies, designated projects, camperships, and awards recognition programs. The Pioneer covered one of M.A.C.H.O’s events in a report titled “Volleyball for a Cause,” published March 7, 2017.

Epstein is also a lifeguard at Jones Beach during the summer, as well as the owner of the “Epi-Center Rescue” business, which provides professional open water aquatic consultation and lifeguard staffing for large swimming and multi-sport events. “As an avid triathlete for many, many years, combined [with] my love and experience as an ocean lifeguard, I saw the need the for better safety measures on the water,” he said. He is currently the lifeguard director for the NYC Triathlon, Swim Across America, Ironman and many other events.

In addition, he has worked as a background actor in movies and television shows such as “Mobbed,” “Deal or No Deal,” “Baywatch,” “The Good Cop,” “Mr. Robot” and “Billions.” He is the lifeguard consultant of the upcoming third season of “Stranger Things” and EMT consultant of ABC’s “Quantico.”