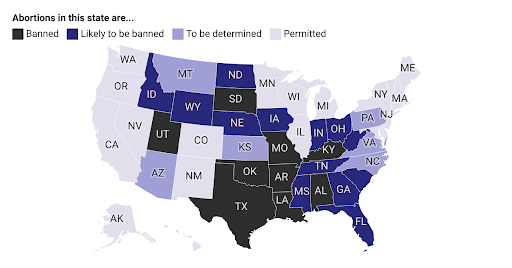 Roe vs. Wade is overturned, leaving abortion rights to the states.

The U.S. Supreme Court overturned the 1973 decision on Roe vs. Wade on Friday, June 24. This court ruling ended an almost 50 year federal right for an individual to have an abortion.

The justices also voted to overturn Planned Parenthood vs. Casey, a case directly related to Roe vs. Wade. This 1992 decision reaffirmed an individual’s right to an abortion as defined in Roe, but allowed states to place more restrictions on the practice. With the court overturning both decisions, there are no federal protections for abortion remaining.

With these rulings, abortion rights will now be left up to the state governments to decide.

Some states have already begun restricting abortion rights. Thirteen states, including Texas, Tennessee, Arkansas, Kentucky and Utah, among others, have passed “trigger laws” in recent years. These laws were written in a way that made abortion illegal almost immediately after Roe vs. Wade was overturned.

People across the country have reacted to the decision throughout the recent months.

“I think it’s very unfair to the women who have lived through the pro-choice era. They have basically been told that they don’t have control over their own bodies and that the government has a higher say over their well being,” junior nutrition and dietetics major Amanda Battista said.

With abortion rights now being up to the states, people have begun to take notice of how the laws vary across the nation.

The Empire State is currently one of the states with the most abortion access, in direct contrast with Arkansas, the most restrictive state. In Arkansas, people are only permitted to get an abortion if their life is in danger. There are no exceptions for rape, incest or the protection of the pregnant person’s health.

“I feel fortunate to live in New York where mine and other women’s right to choose is still protected,” Furey said.

Others agree with Furey regarding New York’s law.

“I think New York has pretty fair reproductive rights and abortion laws compared to other states. I am a firm believer that no government should have control over anyone’s body. Abortion is a personal choice and should always remain that way,” Battista said.

There has been talk from many politicians in the Democratic Party about codifying Roe vs. Wade into law. Many politicians have included this in their platforms for the 2022 midterm elections. Robert Zimmerman, Democratic candidate for N.Y’s third congressional district, home to LIU Post, has run on this platform. President Biden has stated that he supports codifying the Roe decision into law.

“I personally do not believe that the government will codify Roe vs. Wade into law,” Battista added.

“I believe democrats will make their best effort to codify Roe, but I’m skeptical of it passing. While I’ve seen more lately than I ever have about fighting for women’s rights, I’ve also never seen so many blatantly misogynistic opinions, articles and stories of putting women’s lives in danger at the discretion of men in power,” she said.

With many states beginning to restrict abortion, or outlaw it entirely, people are beginning to take this into account when deciding where to live.

“This decision to strip these freedoms from women has absolutely affected my opinion of moving to other states. I used to think of a possible future where my family would retire in North Carolina. At this point, I would never,” Furey added. “I would never move my family from the safety and freedoms we have in New York, provided that we do not become a state in the future that overturns Roe.”

Battista sees abortion rights as important, but says she would also consider other factors when moving.

“As of right now, I do not plan on moving to another state. I am certainly passionate about choice and freedom of the female reproductive system, but there are so many other more pressing matters that I would take into consideration before thinking about abortion rights,” Battista said. “It would really be a plus though if this other state that I possibly move to had a more pro-choice outlook.”

Even with abortion rights being protected in New York, Furey and Battista both feel attacked by this decision.

“No politician, male or female, should tell anyone how to treat their bodies. People believe this is just a matter of ethics, and to a certain degree it is, but it is also another way for society and the government to control women,” Battista said.

Many have viewed this decision as an attack directly on women’s rights. For Furey, the issue of abortion has been an issue of respect.

“As a woman who would be dead without a medically necessary abortion three years ago, I feel disgusted. Disgusted that had certain factors been different in my life, the fetus and I would both be dead, leaving behind my toddler and my husband to be a single father at 26 years old. As a woman, I feel the fire to fight for change in this country,” she said. “We deserve respect. At the absolute least, we deserve bodily autonomy.”

People across America feel the collective anger, and some believe that this anger will ignite a fight for aborion rights, as well as women’s rights as a whole.

“This is just a little setback for women because I know that a lot of women won’t go down without a fight,” Battista said.