With the sudden increase in the use of laptops and Ipads among students in colleges and universities, school newspapers are faced with a choice: should we continue printing a paper edition or would it be more beneficial to switch to the web? The Pioneer is a publication that has the benefit of being accessible on both, paper edition and Internet. However, which C.W. Post students actually read both, and which ones have their preference?

College campuses all around the country have been hit with the Ipad craze and according to Stanford University’s website many are distributing them to students free of charge. On Long Island University campuses, all freshman and transfer students are presented with an Ipad. All students who are registered to return in the spring, and have a good academic record, are offered one at half price. This ensures that a majority of the student body has a portable device with Internet access.The Pioneer knowing this, has made moves to make a more appealing website for the publication. According to freshman Angela Formica, a Pioneer app would be the way to go. “I’m a freshman and I have an Ipad so I think that if there was an app for it then it would be easily accessible and more students would look at it.”  Academic Advisor Tracy Cleary was excited to know that there was such a consideration toward getting the Pioneer’s name out there. “I don’t know how you would get everyone’s attention about there being an online edition but personally I would look at it and think it’s a great idea, especially now with the whole Ipad thing going on.”

Students who don’t often pick up the Pioneer were also interested in knowing that it is available online, “We think that if there were more advertisements, for the online or paper editions, more students would remember to pick them up,” says seniors Anna Djup and Ashley Ingleton.  Much of the campus community seemed to be thinking along the same lines as far as there not being enough advertisement.

Although online editions seem to be an idea that many students are willing to accept and enjoy, others are not as excited. When asked whether she would prefer an online edition as opposed to paper, junior Natalia Zimnoch states, “I like to be able to pick it up in print, but that’s just because I’m old fashioned. I think it’s very convenient to have the print copy for people who prefer reading “the paper” rather than online news.”  “The Pioneer should use the online portal as a utility to give consumers value-added product,” says Professor Sandra Mardenfeld. “That way people will use both product tools.” 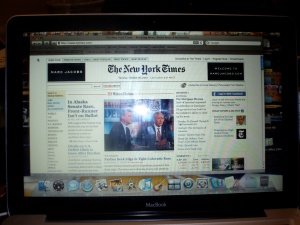 If print is still what you find more convenient, then look for the paper in all of the buildings on campus. However, if you find yourself leaning towards wanting the online edition of the Post Pioneer, then log onto www.postpioneer.wordpress.com