Sending Wishes of Strength to Japan 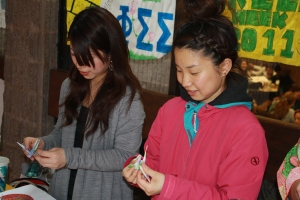 Between April 5th-7th in Hillwood Commons, Japanese students gathered together to pass out origami cranes, and help raise funds and awareness for disaster relief in Japan.  Mio Matsumoto, a senior business major, was one of the students manning the table during common hour on Thursday.  She explained that in origami, a crane symbolizes a wish.

In total over 300 of these tiny paper cranes were folded and Matsumoto says that by the end of the three-day period, there were none left.  Some of the other students also dressed in traditional Japanese garb and walked around campus collecting donations for the cause.

When asked about a total amount raised, Ayaka Katakawa, a senior arts management major, said, “We haven’t even started counting yet, so we’re not really too sure.”

Matsumoto added that though they don’t have a finalized number of how much money they’ve made, they are happy with the results thus far.  She also commented that the funds raised would most likely be donated to either the International Red Cross or the local government of the Miyagi Prefecture, the area worst hit by the March 11th earthquake and tsunami.  The Miyagi Prefecture is home to Sendai, which was the epicenter of the earthquake was located.

The group is trying to organize another fund raising event before the semester is over, but haven’t received the necessary approvals as of yet.  While another fundraiser is not a definite, the students involved did add that those who wish to contribute to relief funds could do so by donating to the International Red Cross.