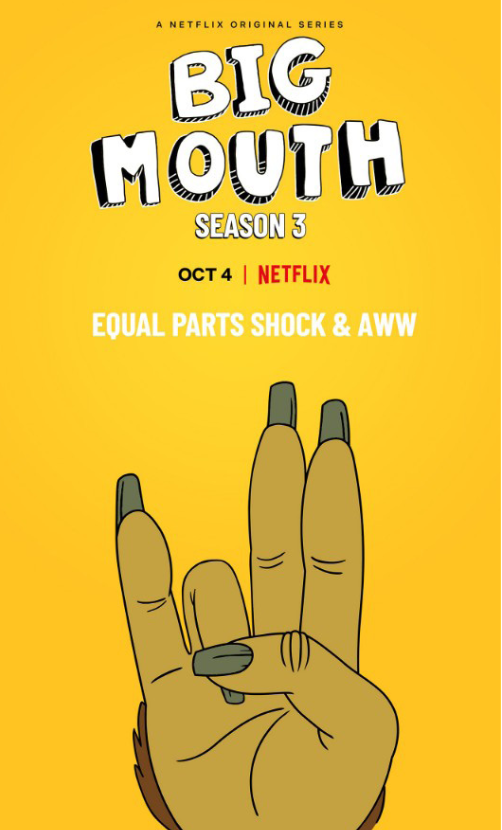 From popping adderall to closeted gay romances to sexist dress codes, its everybody’s least favorite time in their lives: middle school. “Big Mouth” is back and bigger than ever tackling more issues that riddle modern day puberty with its crude comedic touch to their overall positive messages.

Imoniri Aghomon is a sophomore healthcare administration major. “I liked season 3 a lot. It brought about more of the dynamics I was thinking about for kids that age like LGBTQ, male self control, [and] females being blamed for making guys feel aroused,” Aghomon said. “It brought about lots of issues that also happen in middle school and how teachers react and shy away from gender discrimination.”

If you love character arcs, then you’ll be happy to know that new insight was shed upon many different characters. Matthew (Andrew Rannels) embarks upon finding gay love, Jay Bilzerian (Jason Mantzoukas) explores his sexuality and mental health, Nick (Kroll) struggles with phone addiction and a new romance, Missy Foreman-Greenwald (Jenny Slate) deals with controlling her alter ego and also a new romance, Andrew Globerman (John Mulaney) dips his toes in the waters of forbidden love, and much more. There’s also the introduction of some new characters, including Ali (Ali Wong), a pansexual transfer student, and a female hormone monster.

These numbers bring another dimension of comedy and playfulness to the show as each song carries its purpose through well and gracefully. The transitions from dialogue to singing and dancing are arguably smoother than previous seasons, and are aren’t as random as previously shown.

All in all, season three of “Big Mouth” did not disappoint with its comedic material or its creativity on discussing these taboo topics. “It was a bit fuzzy during the first episode, but it really delivered, and I’d be okay if the show ended on that season,” Aghomon said.

Yes, the show is beyond crude by showing naked cartoons of middle schoolers and showing Jay have sexual relationships with various inanimate objects, but it takes the shame away from going through puberty. All the things we were embarrassed about and found hard to discuss at that age is being discussed in a lighthearted sense with positive reinforcement.

There are completely exaggerated situations, but they get the point across. If you’re looking for a good relatable laugh with intriguing story lines and engaging characters, then “Big Mouth” season three is right up your alley.