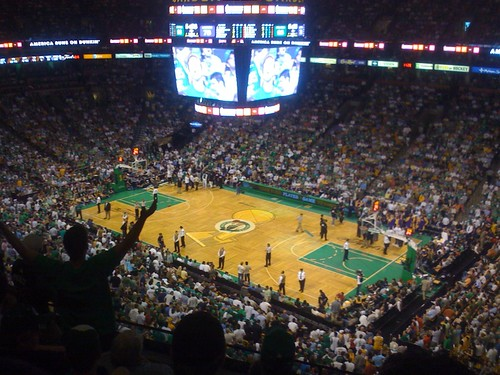 The NBA season kicked off on Oct. 18, 2022. Last year’s championship winner, the Golden State Warriors, defeated the Los Angeles Lakers 123-109 on opening night. Could this win be a preview for another prosperous season for the Warriors, or a season with new developments?

Students on campus shared their predictions for the season for teams in the Eastern and Western Conferences. Students see different team and player developments as factors that could affect the outcome of the season.

“A healthy Nuggets team is scary for the west, like that’s a crazy difference. A healthy Clippers team too, the Nuggets and Clippers are both super underdogs, but fully healthy. Another healthy good development is going to be the Timberwolves with Rudy Gobert. They’re going to be really good,” he said.

“I think everyone should be paying attention to the Lakers. They are an absolute circus of a basketball team. LeBron came to town and decimated their young core in exchange for a championship which came in the NBA bubble during covid. That championship will forever have an asterisk next to it,” Serrao said. “They have not even come close to another championship since. The Lakers have no picks, a thin roster, a brittle Anthony Davis, an aging LeBron James, and Westbrook’s albatross of a contract. Terrible situation in my opinion.”

Ochoa also expects the Philadelphia 76ers to have success this season, with the performance by James Harding so far this year.

“If James Harding keeps playing the way he started the season off, Philly’s gonna go deep as well,” he said.

New York has two NBA teams, the Brooklyn Nets and the New York Knicks. So far this season, the Knicks have had three wins and one loss, and the Nets have had one win and two losses.

Ochoa sees the Knicks’ addition of Jalen Brunson as a positive for the team, as well as other players being beneficial this season.

Students also see the Nets as a team that has potential, but also some shortcomings in their lineup.

“The Nets have Kevin Durant and Kyrie Irving, arguably two of the best players of all time, but they really have nothing else besides them and Ben Simmons, so it’s really just up to them three, and Ben Simmons has been lackluster. It’s a big revenge season for him as well, but besides those three, they really have nothing to work with,” Ochoa said.

Serrao also shared his predictions for the New York teams.

“I think the Knicks and the Nets are going to have successful seasons. The Nets will go far just because they have Durant and Irving, but they are not a well constructed team and their organization is lacking what it takes to truly be a winning franchise,” he said. “I think the Knicks have themselves a young, fun, and deep roster. They don’t have the star power that Brooklyn has. But, they have guys from 1 to 5 and a second unit that can put up points in a hurry. In the end, Brooklyn will end up making it farther, but I think both Knicks and Nets fans are in for a fun season.”

The Golden State Warriors walked away victoriously last season, but students see potential changes in the team’s lineup as a threat for them moving forward. After a physical altercation in which Draymond Green punched his teammate Jordan Poole made headlines, some feel that Green might make a departure from the team.

“I think they are handling the situation well with Draymond Green and Jordan Poole, but eventually it’s going to get to a point where I think Draymond is gonna leave the team,” Ochoa said.

Ochoa also said that he thinks this potential loss could negatively affect the team’s performance this season.

“Obviously it’s a better decision for them to keep their younger core, and to just keep the same team and build around the younger core for the future, but Draymond is just such an important piece that I don’t think they’re ever going to win a championship again without him,” he added.

Serrao sees the team doing well this season, but agrees that the Green-Poole altercation could negatively affect the team.

“The Warriors are totally going to do good again this season. I honestly would not be surprised if they managed to go back to back and win the championship again. That team is a well oiled machine. Steph is unstoppable and when Steve Kerr gets the rest of the team to play Warriors basketball, they are going to be hard to stop,” Serrao said. “The only thing that can hold the Warriors back this year are injuries or issues over guys getting the contracts they want, or if Draymond Green does something stupid.”