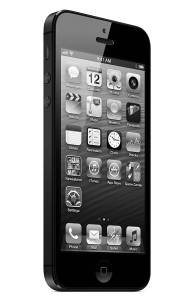 On September 12, Apple announced the arrival of iPhone 5, the thinnest and lightest iPhone completely redesigned to feature a 4-inch Retina display, an A6 chip for fast performance, ultrafast wireless technology, and better battery life.

According to a press release from Apple, the iPhone 5 comes with iOS 6, the world’s most advanced mobile operating system with over 200 new features including the all new Maps app, Facebook integration, Passbook organization, and more Siri features and languages. The new body is 18 percent thinner and 20 percent lighter than the iPhone 4S. The taller 4-inch Retina display delivers more pixels than the iPhone 4S allowing one hand to tap, type, and scroll. The 8 megapixel iSight camera is 25 percent smaller than the cam-era in iPhone 4S. The new panorama feature lets you capture panorama images of up to 28 megapixels by simply moving the camera across a scene in one smooth motion. New video features include improved stabilization, video face detection for up to 10 faces, and the ability to take still photos as you record.

One of the major drawbacks to the new iPhone is its Lightning connector that is smaller than the previous connector. The all-digital connector features an adaptive interface that uses only the signals that each accessory requires. This means all Apple accessories such as the iDock are no longer compatible with the new iPhone. However, a Lightning-to-30-pin Adapter is available to connect the iPhone 5 to legacy 30-pin accessories. This adapter will set you back an extra $39 because it is not included in the box. It may pose a problem working and fitting in with all other accessories. The iPhone 4S will now be available for just $99 and iPhone 4 will be available for free with a two-year contract for those who do not want to upgrade their entire Apple collection. The iOS 6 software will be available on September 19th as a free software update for current users.

The iPhone 5 comes in either white & silver or black & slate, and will be available in the US on September 28th on the AT&T, Sprint, and Verizon Wireless networks for a suggested re-tail price of $199 for the 16GB model, $299 for the 32GB model, and $399 for the 64GB model. Pre-orders began on September 14th.