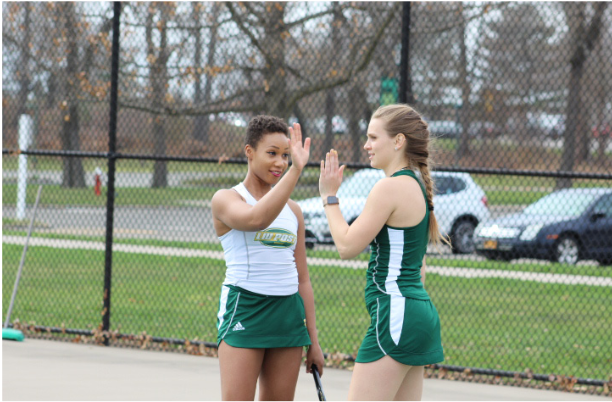 The women’s tennis team closed up its 2018-2019 season with a 7-0 loss to Adelphi University on Friday, April 12. “Some players were hurt and some haven’t had the chance to practice much during the , but we still did what we could,” Shanice Arthur, a senior psychology and forensic science major, said

Rain and heavy winds didn’t stop the Pioneers from stepping on the court at 3 p.m. The game started with intense doubles. The Pioneers kept up with only one game behind Adelphi.

This was the team’s last match before break. To commemorate the seniors, Arthur and senior Katie Kumpas, adolescent education major, were given flowers as for their years as players on the team. The two seniors were ready to face their last collegiate match, but with mixed emotions. “Honestly, I don’t know where my tennis career is going to go from here. College tennis has helped me make new friends and teach me how to balance my time,” Arthur said

Sophomore nursing major Veronika Koudelkova and Arthur had a close game in their match. The two kept up with Adel-phi for most of the but fell short by the end of the match losing 6-5.

While the Pioneers were sunk in the singles, a noteworthy game between Arthur and Adelphi’s Samantha Perri gave the Panthers a challenge. Keeping up with the fast-paced game, Arthur managed to keep a tie between her and Perri for up for six matches. After that, Perri took over the game and the close game ended in a loss 10-7 for Arthur.