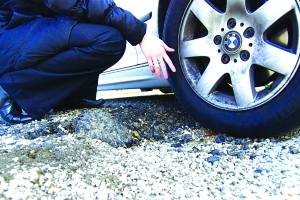 According to CBS News, over 2,000 potholes have been reported this season in the town of Hempstead, compared to 127 last year.  For those of you who aren’t familiar with potholes, they are bumps or perforations in concrete, which are usually a direct result of ice on roads. Typically, when the temperature drops the ice or snow break down pavement to make it weak; and as more cars drive over the ice, the pothole forms by chunks of pavement leaving an area.   So how does the pothole situation look at C.W. Post?

Junior Kelli Fisher, a nutrition major says, “I think the school should pave it at some point, since most of Nassau County is taken over by them, especially the Long Island Expressway.”

“I find them annoying and dangerous, especially the way some people drive on campus,” Junior Emily Rawson, photography major who lives on campus said.  “I’ve heard a few people talk about how it’s hard driving in the rain because they don’t expect them, and then they’ll hit them. It really could destroy their car.”  Some people have spent over thousands of dollars to pay for new tires and to fix the rims of their cars all due to pothole related incidents.

Some students haven’t noticed any potholes or faced a problem by them. When Senior Christina Kay, broadcasting major, was asked whether or not she has encountered a pothole on campus, she said, “They haven’t caused a problem for me at all.” Apparently, neither does Public Safety, who has refused to comment on the pothole predicament on campus and whether or not students have reported them.

In the past month, towns have been filling and paving the potholes. Most likely, with the weather still cold, the potholes will still appear. Around campus, the potholes have stayed, so a warning for student drivers is to be careful when driving anywhere.