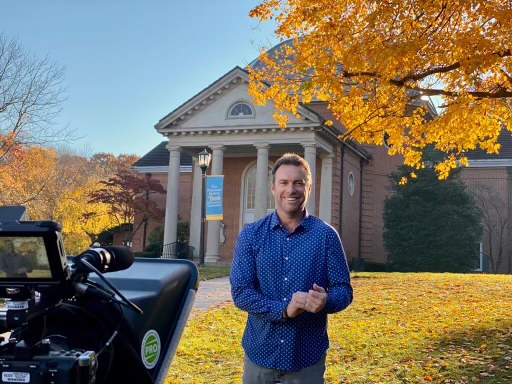 “The College Tour” comes to campus

LIU Post and Brooklyn students will be featured in an upcoming episode of the fifth season of “The College Tour”. The show is presenting what it is like to be a part of Shark Nation, and will feature six students each from the Post and Brookln campuses; covering LIU Global, the business department, Roc Nation, art, health professions, division 1 athletics, student life and the honors college.

Alex Boylan is the host and executive producer of “The College Tour.” Boylan has hosted “The Chef’s Table” and “Animal Attractions” on PBS, was CBS’s National Ambassador’ for two summers on the ‘CBS Buzz Tour,’ hosted over 100 segments for the Travel Channel and was Rachael Ray’s sidekick hosting “Rach to the Rescue.”

Boylan decided to create “The College Tour” after seeing his niece experience the difficulty of touring college campuses.

“What inspired me to create “The College Tour” is a situation that happened two years ago. My niece was in high school and trying to figure out where to go to college. She was given one trip to go on a college campus tour. She chose to come out to Los Angeles to go on tours with me. I took her to all of these schools in the area, but she wanted to go all over the county. She was like “oh Alex, I want to go to New York, I want to go to Texas.” But I can hear my sister. She’s thinking “you’re lucky you got a trip to Los Angeles, we can’t afford to travel around the country.” The average college trip is $2,500 for a family. It’s expensive. As that problem existed, I started to spend some time with my niece online, trying to help her navigate [the different colleges] … it was so challenging to try to find her vibe and find her tribe because every school does it’s own independent thing from a media standpoint. My coworker Lisa has helped launch some of the biggest shows on the planet, so I spoke with her and some others on our team and said that I think higher education needs its own show,” Boylan said.

The episodes are available on collegetour.com,  and will be available for free on Amazon prime.

“Our mission is to make The College Tour accessible for free to anyone in the world. And we’re really proud of that. You can go on Amazon prime, not be signed in, and watch The College Tour,” Boylan said.

Boylan describes “The College Tour” as a facet for students around the world to see colleges through the lense of students who attend that college.

“We’re telling real, authentic stories,” Boylan said. “These are real students that go to Long Island university. These are really their stories. When it’s captured the way that we do with The College Tour, someone watching could be from anywhere. From Alaska, to California, to right down the street and can now look at a college student and see the school from their point of view … As you’ve looked at The College Tour in our first four seasons, we have seen tiny schools, technical schools down in Florida, mountain town schools in Colorado, and even big state schools. We just like to find great universities with fantastic stories to tell so that we can pull off what we’re doing.”

Each episode has about 9-10 weeks of pre-production, a week and approximately two months to edit. LIU will be featured in the 46th episode of “The College Tour.”

Senior business major Alina Chen was one of the 12 students featured for LIU.

“About a month ago, I was contacted by Dean Berthel, Ashley John, and Matt Blanar about this opportunity. With “The College Tour,” we sat down and talked about my experience here at LIU and came up with a script that really embodied my experience here,” Chen said.”It was funny because for the script I really had to reflect on my four years here at LIU and this felt like the perfect way to close out this chapter of my life. I truly am so happy for the experiences that I’ve gained here.”

Chen felt that “The College Tour” production team eased how nerve-wracking being on camera can be.

“I was in contact with the amazing production team of “The College Tour” throughout this month, and it was a phenomenal experience working with them. They were so professional, yet so fun, and I really enjoyed the whole process. I was selected for the segment ‘student life’ and talked about how my experience is like here at LIU academically, athletically and professionally.”

Chen says that she filmed most of her segment of the show in The Student Body Boutique, where she has been the CEO for two years. She also used her time on the episode to showcase her sorority, Alpha Phi Epsilon, and her experience on the fencing team.

“I was allowed to invite my friends from the Student Body, as well as my sorority to join me in the filming. I also did an additional day of filming at LIU Brooklyn with my fencing team … What made this possible were all the people within these organizations that pushed me on and supported me,” Chen said. “This is just as much about them as it was about me. I was blessed enough to voice all their accomplishments but I will not be in this position without them. I’m so grateful I was able to feature them during filming. It really was a bittersweet moment reflecting on my time here at LIU … Don’t ever underestimate the power of getting involved on campus, being open minded, and putting yourself out there.”