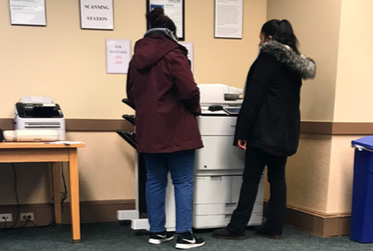 The photocopy machines in the library now require students to insert their LIU ID cards before use. Some students are confused about the change in the copying procedure. The change was made without an explanation, leaving many students to believe they will be charged for printing.

Thomas Walker, associate dean of libraries, confirmed that students will not initially be charged for copies.

“Actually, they [the students] don’t have to pay to print. The university is still letting students print for free up to 500 pages. It’s a system of recouping cost once the free copies are exhausted,” Walker said about the new photocopying procedures. Students’ ID cards are encoded with a counter to track the amount of pages they print. Students who don’t have their ID card on them will be unable to print. However, Walker said the library plans on using a copy machine that accepts coins and copy cards in the future.

Louis Flores, a junior health care administration major, was angry when he heard that students would have to pay to print.

“I overheard in class that it was possible that we would be charged to print at the library and I guess since we now have to swipe our cards to print, [it] made me believe it, but 500 [free copies] seems fair,” Flores said.

Morgan Bailey, a sophomore acting major was also upset. “It’s outrageous; I’ll have to pay per sheet, I have to print a paper today and I’m trying to figure out some alternatives to do so,” Bailey said, unaware of the first 500 free copies. Many students were searching for other ways to print on campus to avoid a fee.

Because students were not made aware of the change in copying procedures before they found the reconfigured copying machines, they are curious as to where the money will be going, who decided to implement this new rule and why.

Walker explained the rationale behind the copying charges. “Each year, we spend in the tens of thou- sands of dollars on paper alone; we would rather be spending that money on database subscriptions to help people with their current research or book purchases,” he said. “It was a group decision [to eventually charge students], but I support it; there’s not one particular person who decided to implement this rule.”

When using the library printer, the words “Secure Queue” show on the screen with the student’s name and a balance underneath. The screen reflected a 50.00 balance, similar to a commuter student dining dollars balance (resident students receive $350 dining dollars). Students saw that after printing two pages, the balance was not affected, while few others complained about being charged. It could be a glitch in the system, but it wasn’t confirmed if they were charged or not.

According to Louis Pisha, Reference and Interlibrary Loan Librarian, the school plans on making students have to swipe their cards on all printers within the campus.

Fortunately for students, printing is still free in places like the writing center on the second floor of humanities and the career bar upstairs in Hillwood Commons. The fee after 500 pages has yet to be determined, according to Walker.