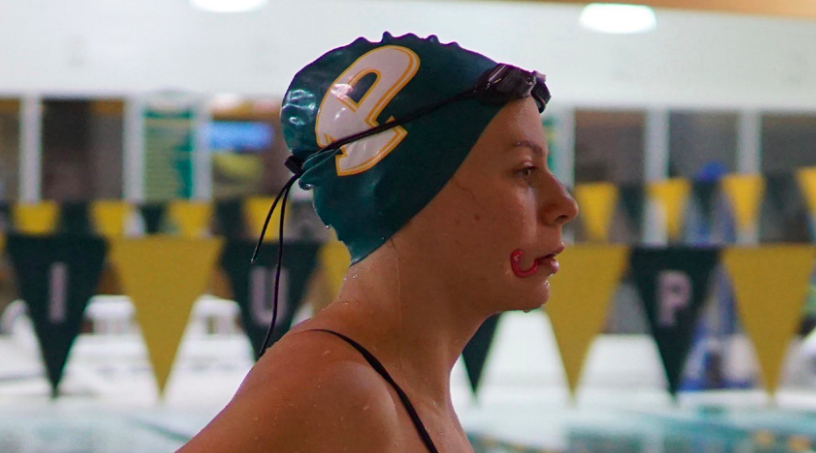 Editor’s Note: Karis Fuller is the Arts & Entertainment Editor of The Pioneer.

Fuller’s success combined with strong performances from other swimmers, such as junior math and physics major Elizabeth Law who came in second place in the 200-medley relay, led to a fifth-place for the Pioneer team.

One of Fuller’s close friends, former swimming team member and alumna of 2018, Elin Kvarnemar constantly follows the success of her former teammate.

Kvarnemar works at a Swedish candy shop in Manhattan as a shift leader, so she was too busy to see Fuller compete, but she cheered from distance. Her expectations on Fuller at this year’s championships were high.

“I 100 percent expect for Karis to win at conference. Karis would have to literally miss her races for her not to win,” Kvarnemar said.

Despite living up to every expectation, Fuller was fatigued for the weekend,
swim coach Kristen Foley said. “Karis was not as rested for this meet
as the rest of the team because we already knew she’d be going to the national championships.

Despite that, she raced hard and won all of her events. She came through for her team and I feel confident that when we get to Indianapolis for the NCAA Division II swimming championships, she will swim faster after tapering and resting,” Foley said.

Fuller agrees on her not being as rested as she could have been, but with
nationals only two weeks away she didn’t want to ease up her training. “I didn’t see a point in dropping my training when I had already qualified my place for nationals in November,” Fuller said.

Coming up next for Fuller is the NCAA Division II championships in Indianapolis at the IU Natatorium on March 13. Fuller hopes that her last three wins will translate to more.