Winter Isn’t Over Yet 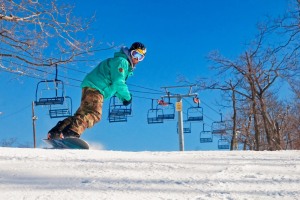 Last year’s winter season in New York featured plenty of snow and crowded ski-areas. In the event that we see snow in March, for snowboard and ski enthusiasts at LIU Post, the ski areas are a little further away than just a walk out the door. However, various opportunities are available; some time-consuming to get to, while others can be reached after 90 minutes on the road.

LIU Post student and snowboard enthusiast, Andrew Trager, is not too impressed with the New York snowboarding. “For the time you are going to drive from here, it makes more sense to go to Vermont, because it’s better than New York, and pretty much the same distance,” he said, and then added, “If you want fresh powder, nothing compares to Vermont.” Large, famous ski areas, such as Killington, are located an estimated five hour drive from Long Island.

Trager enjoys doing an occasional Vermont trip, but usually he makes the 90 minute drive to Mountain Creek in New Jersey, where he buys a season pass every year. “I love rails and jumps,” he said, explaining how the mountain offers these facilities from top to bottom. Compared to the mountains in New York, Creek is smaller, but according to Trager, they are not worth more than twice the drive. “Mountain Creek features a ton of terrain, along with park-facilities, and offers riding for everyone, both beginners and advanced riders,” he said.

Junior Film major Christopher Jakobsen has visited Mountain Creek once. “I thought it was decent, but it didn´t have a lot of steep areas or off-piste opportunities,” he said. “For people who like riding the park, it is pretty good.” Jakobsen would rather do a trip to Vermont, “but I wish the drive was not that long,” he said. He is planning a spring break on the mountain as he’s currently researching which areas that will have the best snowfall at the moment. “After I moved to New York, I have done way too little snowboarding,” he said, explaining that time-consuming studies and a limited budget make weekend trips to another state a little too stressful. “Hopefully I manage to spend my week vacation up there, but I would love being able to visit the mountains more often,” he said.

Several online travel agencies offer bus trips to New York locations, Mountain Creek, Vermont, such as Killington, and Okemo. The packages can include transportation back and forth, lift-tickets, and rental- packages for both ski and snowboarders, if necessary. Day trips to Vermont ski areas usually depart from New York City locations around 4 a.m and arrive on the mountain at 9 a.m. The leave the mountain at 4.30 p.m. and reach the city again by 9.30 p.m. Visit sites such as www.nacski.com, www.skiclubofnewyork.org, and wwww.urbansherpatravel.com for more details and prices for day and weekend trips.

For spring break trips, www.skitravel.com offers packages to college students, 18 years of age and older, from March 11th – 15th to Mount Tremblant in Canada. The trip includes transportation (if needed), a shared condo, and four days of lift-tickets.

For LIU Post students, the Delta X Extreme Sports Club arranges ski-trips from time to time, usually once a year. Last year’s trip to Killington, VT, was cancelled because of poor snow-conditions on the mountain. Visit the club´s Facebook page, Delta X – Extreme Sports Group, where times of meetings and ideas can be discussed. “I think Delta X is an excellent club,” asserts group advisor, Kent Hatch. “Its purpose is to expose students to high adventure activities that they might not otherwise be exposed to. Students also get to see parts of the Northeast they might otherwise not get to see. Any students who like the outdoors or adventure should definitely join Delta X.”

Although it feels like spring, those who are not finished with winter still have many opportunities. The season usually ends in mid March, or in the beginning of April, depending on the conditions.