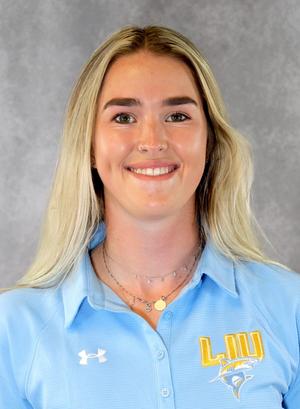 From Friday, Sept. 30, to Sunday, Oct. 2, the Sharks women’s golf team competed among 16 universities in their third competition of the season at the Navy Fall Invitational.

The Sharks finished fifth as a team. However, out of 88 total competitors, it was Sharks’ senior Emily Byrne who came out on top. Her 2-over-par score of 146 was three strokes ahead of the second-place finisher, Anna Ferreyra-Heit from Delaware State.

This is Byrne’s first season at LIU after playing three years at Limestone University in South Carolina.

Byrne was also the Sharks’ top performer over the first two events of the season. At the Delaware State Fall invitational on September 19-20, Byrne finished fifth individually, only one stroke away from tying for first with the other top four golfers.

In the week leading up to the Navy Fall Invitational, Byrne finished first for the Sharks at the Boston College Intercollegiate.

Byrne is from Liverpool, England, but knew for many years she had a goal of playing golf in the NCAA.

“I’ve been playing golf for about 10 years now, and ever since I was about 14 or 15, I had friends who were coming over here and started playing college golf,” she said. “Then, when I got to about 15 and 16, I set my heart on playing golf and then getting to the collegiate level.”

With a combination of her athletic and academic plans in mind, Byrne had her heart set on coming to the Big Apple to finish her collegiate career.

“I was down in South Carolina, and I decided I wanted to change and started looking in terms of location to be a business major,” she said. “I wanted to head up to New York, and then I started looking around this area and found LIU. I looked at the team, then started communicating with the coach and decided it was definitely the school for me.”

Bryne knew it was going to be important to make an impact early on in her playing time here at LIU, and she could not have wished for a better outcome.

“It’s amazing, I’m just on cloud nine right now. Coming over here, I didn’t know where my golf was going to be. I had quite a big injury over the summer, and I was not sure if I was going to be able to play at the level I knew I could,” she said. “After I got here and had all the encouragement from the team and all the support I needed, to come and play really well is big for me.”

Despite the conditions of the long weekend, Byrne credits her performance, along with that of the team, to the perseverance they have shown so far this season.

“We had very bad weather the whole time. We had the back end of the hurricane, so we just wanted to get through and stay as dry as we could,” she said. “Just knowing I had to get through it and stay strong mentally helped it.”

Byrne was named a Northeast Conference (NEC) Prime Performer for the month of September. She could not have been more thrilled for the honor.

“I was really shocked and just couldn’t have expected this first month to go any better, so I’m excited to see the rest of the season and see how I do,” Bryne said.

Bryne looks to capitalize on her success early on at LIU and collectively carry it throughout the rest of the season.

“The goal is definitely to win the conference with the team we have and a great set of girls who have the ability to do it,” she said. “Personally, I just want to enjoy the last two years that I have of college golf with a great team.”