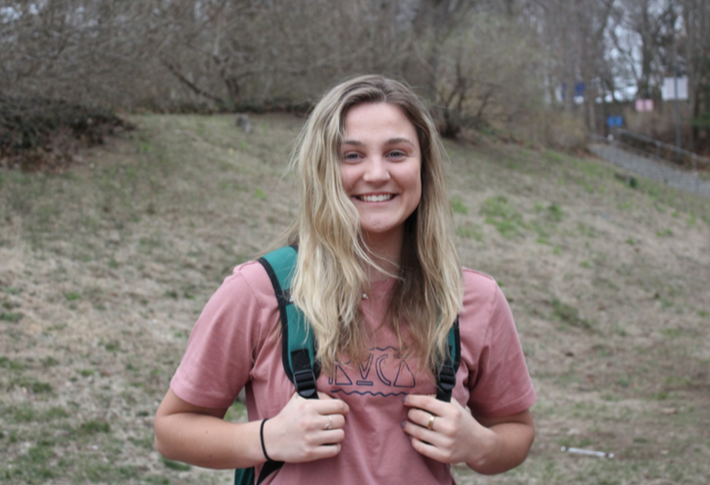 Freshman lacrosse goalkeeper Hailey Duchnowski had an impressive debut in her first year on the team in their match against Merrimack College on Feb. 23 when she made 12 saves. She’s been a starter player in every game this season.

As a new Pioneer, Duchnowski’s favorite part of playing in gold and green is the atmosphere from the team and cheering fans. “Especially during games when the crowd will come and support you,” she said.

Duchnowski, a public relations and communications double major who grew up in Miller Place on Long Island, began playing both lacrosse and soccer in second grade. “I stopped playing soccer probably around third or fourth grade, and started playing field hockey,” Duchnowski said. Lacrosse has always been a big part of Duchnowski’s life “because my dad played and my aunt played,” she said.

Her father played lacrosse in college and had a huge influence on her game. “My dad was always my coach growing up,” she said, adding that he constantly worked with her to improve her game.

The women’s lacrosse team won eight out of their ten games this season, and Duchnowski is aiming for a championship title. “My goal coming into this season was to win a national championship,” Duchnowski said, adding that the team works hard at every practice to achieve that goal.

“I’m excited that Meg’s [Meghan McNamara] still going to be the head coach,” Duchnowski said about the Post and Brooklyn teams merging. “Our team is still going to be a team, we’re just getting new faces, which will be nice,” she said. Duchnowski believes that next season will be a challenge because “we’ll be playing teams we’ve never seen before in a higher division.”

After college, Duchnowski has no plans to abandon sports. “I definitely would love to keep sports in my life after college,” she said. If she doesn’t play herself, she sees herself on the coaching side. “Anything to just keep it in my life.”