From Taboo to Tattooed

From the adrenaline running through your veins before feeling the sting of a relentless needle, to the reveal of a completed piece of art on your body, getting tattooed can be rewarding or devastating. When a beloved portrait of your Grandmother ends up looking like a cracked-out Gary Busey, it becomes your permanent night- mare. Gary will never go away. But does that mean our society has grown to accept him? I mean, the tattoo itself?

What if you are working in a corporation that forbids tattoos altogether? Do people even really care anymore whether you have a tattoo or not? After surveying 100 LIU Post undergraduates, students are more accepting of tattoos than ever, even though a majority of them said they were not sporting any body ink.

In fact, 92 percent of guys and gals said that they wouldn’t care if the person they were dating had a couple of tattoos. A small 6 percent of students said that it depended on the person, and an even smaller 2% percent said that they would not date anyone with a tattoo. However, times are changing and accord- ing to a recent national survey (Pew Research Center, July 2012), 36 percent of young adults ages 18-25 are sporting one or more pieces of body art, while 40 percent of adults ages 26-40 have tattoos as well. Tim Murphy, a junior philosophy major said, “I do believe tattoos are becoming more widely accepted in society with many popular icons sport- ing more and more tattoos. The stigma of tattoos being a sign of rebellion is fading and they’re becoming a form of art.”

Even in most corporate and retail workplaces, having visible tattoos is becoming less of an issue and more of a personal statement of individualization. GEICO, an insurance company, stated that their visible tattoo pol- icy is strict, yet each office of the company varies. In the Westbury Law Office, small wrist and ankle tattoos can be shown, while in the Woodbury Offices, no visible tattoos are allowed at all. Daniel Duffey, a junior english major said, “I thoroughly enjoys tattoos, particularly when juxtaposed with professional attire, like a neck tattoo with a suit and tie or a sleeve with a polo.” Other companies, including GameStop and Pac

Sun, say tattoos are allowed to be out in the open for all to see so long as appropriate dress code is followed. Gamestop’s dress code includes wearing either a polo or collared shirt while wearing khaki pants or jeans. Pac Sun’s is similar, except that you are persuaded to wear their skating and sports related shirts, hats, and pants.

After interviewing LIU undergrads, it would seem that most of our school population has adapted to the body ink trend that has been around since the late 40’s in the United States alone. Sadly, not everyone is so accepting of tattoos. “Tattoos are whatever. I personally don’t like them, nor do I think anyone else should get a tattoo, only because the permanence scares me. I’m not decisive enough to get one,” said Avi Lessman, a junior in the education department. Even Professor Ryden of the English department stated, “Tattoos freak me out.”

While a majority of the interviewed students felt that tattoos had no impact on their personal lives, it would seem that there are still parts of our generation (and previous generations) that feel as though tattoos are less than appealing. What it comes down to in the matter of getting inked, or dating someone who has a couple of pieces, is opinion. Judgments will always be made at the expense of others, and regardless, people will either go through the pain of getting Sponge Bob tattooed on their bum or they will laugh as their friends feel the misery of having needles rapidly digging and pull- ing at their fleshy bottom. 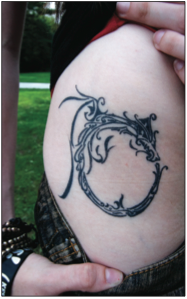 Whether or not you can deal with the permanency of a tattoo or be around an ever-growing community of average people with some colorful bodies, tattoos are here to stay. From the opinions of students, and the loosening tattoo policies in the work force, it can be said that people may see a divorce attorney with sleeves under his suit or see a grocery bagger with tattoos on his or her neck one day. Jane Addams once said, “Social advance depends as much upon the process through which it is secured as upon the result itself.” So to free one’s self from this arrogance, read some books, go to some shops, and know that some of our LIU undergrads will have some interesting sagging bodies and stories to tell their friends, family, kids, and grandchildren through the ink on their bodies.