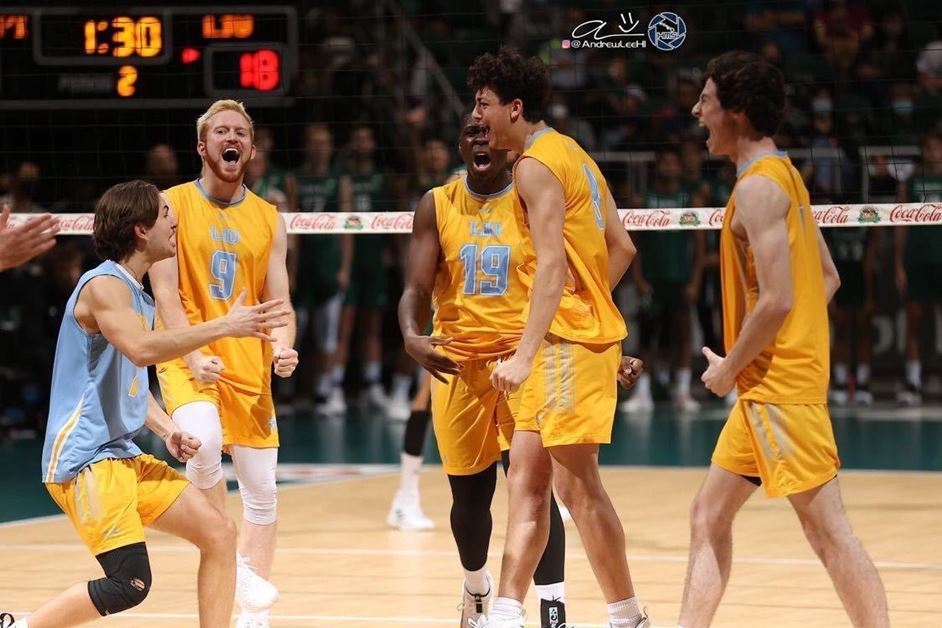 On Tuesday, Jan. 25, the Sharks defeated Fairleigh Dickinson to claim their first win in program history. This victory took less than two weeks to accomplish since the start of the season. As a young team, this win certainly sparked confidence and drive among the players.

Freshman Opposite Luke Chandler was extremely excited to be a part of this moment.

“It was a surreal experience to have a part in the first win in program history, as well as the first win of my college volleyball career as a freshman,” he said. “Our team chemistry was on point throughout the whole match, and we served and blocked especially well. FDU is also a first-year program, so it was exciting to see how we would stack up against them.”

As a new team, the Sharks have had a natural experience creating a strong team dynamic. Between being teammates, classmates and roommates, the players are able to spend time together to strengthen the bond needed to perform well on the court.

Head Coach Shawn Patchell has done a phenomenal job leading the new program. The players definitely see him as a mentor and role model. Patchell has matches set up against some of the top teams in the country, which is very rare for a first-year team.

“Coach Patchell has given the team a great analogy about how we overcome challenges. He told us when a storm comes, buffalos herd together and fight through the storm, making it out alive,” Chandler said. “On the other hand, cows split off by themselves and try to run from the storm, and they do not survive. Our team has to be like the buffalo. If we try to solve our problems individually like the cow, we will not succeed.”

The Sharks have an independent record of 4-10 thus far. They took on number three ranked Hawai’i for the final time on Saturday, Feb. 12. Although they lost the first set, the Sharks were able to hit .318 percent. Junior Jordan Cooper and Sophomore Kade Frischknecht led the team with seven kills each.

“This is the first time this team is together, and our coaches have done a very good job connecting us as a team. By sticking together and putting in the hard work, we will be a pretty strong team that everyone in the nation will respect,” he said.