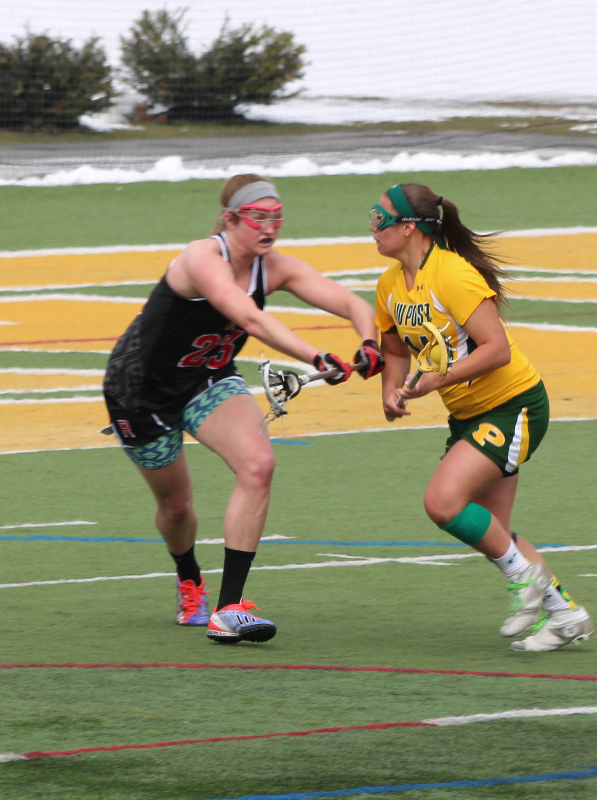 On Saturday, April 18, the women’s lacrosse team (12-2) clinched a playoff berth with a 13-5 victory over St. Thomas Aquinas College on Senior Day at Bethpage Federal Credit Union Stadium in Brookville, N.Y. The hosts locked up the No. one seed in the East Coast Conference playoff picture.

LIU Post closed out the opening half on seven straight goals to grab an 8-1 lead. Sophomore attacker Stefani Vagelatos started the streak off of a pass from fellow sophomore midfielder Cara Douglas who scored the following marker. After cruising to a dominant first period, the Green and Gold kept the wheels rolling and pulled away from the visitors, which boosts the Pioneer’s momentum heading into postseason action. Midfielder Jenna Pierro, and senior defenders Kali Maxwell and Emily Hanifan were all honored along with three other seniors in the pre-game ceremony.

Head Coach Meghan McNamara and the squad will travel to Pennsylvania on Wednesday, April 22, where they’ll put their nine game winning streak on the line against West Chester University of Pennsylvania. The opening draw is scheduled for 4 p.m.