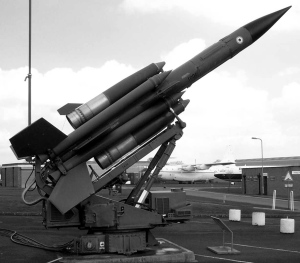 Nuclear Weapons, the two words that can instantly scare almost anyone. Nuclear power and nuclear weapons have been the cause of a lot of international conflict since nuclear weapons were first used in World War II. With anything that causes conflict, comes political instability.

Here’s a little background on the whole issue. There was only one case in history during which nuclear weapons have been used. The United States army used them against Japan in World War II when they dropped atom bombs on Hiroshima and Nagasaki, the effects of which are still felt today. On April 26, 1986, during the cold war, in Chernobyl, Russia, a major nuclear meltdown occurred. The nuclear fallout traveled throughout Eastern Europe, causing hundreds of cases of radiation poisoning stretching from Russia to Poland. The area of Chernobyl is still unlivable and will be for several hundred years. Today, there are five countries that have nuclear power and are permanent members of the United Nations Defense Council, the United States, the Russian Federation, the United Kingdom, the People’s Republic of China, and France. Several other countries have achieved the ability of nuclear power, including India, Pakistan, and the Democratic People’s Republic of North Korea. Still, other countries are currently working on developing nuclear power and weapons, which makes some other countries very nervous.

So what is the big deal? The big deal is that for every country with nuclear power another country is worrying about the possibility of being bombed and basically completely destroyed by one of these weapons. However, not since World War II has a country ever used their nuclear weapons, even during the Cold War, which was a giant nuclear arms race. How is it possible that a nuclear war has never happened? How is it possible that the world can go through rifts, conflicts, and wars and never use a single one? The answer is not quite clear, but it does revolve around one single thing: politics.

There are two very popular theories as to why two nuclear powers have never, and will never, go to war with each other. The first is called nuclear deterrence, and it was the political tactic and theory used during the Cold War. Basically, the theory is that one country won’t bomb another because they know the other country will bomb them back. This is how the Cold War was fought. The Soviets and Americans would use their weapons as not only a threat but a defense. Both countries threatened to bomb the other but also said that if any missiles were launched then they would bomb them back. This tactic can work but is dangerous. Each government involved will continuously increase the amount of nuclear weapons they have in order to show that they are not only more powerful but have a bigger defense than the other. By the end of the cold war, the Soviet Union and United States had enough nuclear weapons to destroy the entire world seven times over.

Yes, nuclear deterrence can work, but is just building up a nuclear arsenal to stop another nuclear arsenal really that smart? To many, the answer is no. That single answer sparked an entire treaty among the countries in the nuclear world. The heads of all the nuclear countries gathered at the end of the cold war and signed the Nuclear Non-Proliferation Treaty. This single treaty stopped the spread of nuclear arms from circulating around the world, ordered nuclear states to limit their nuclear arms, and pushed for these nations to use their nuclear technology for power sources and not weapons.

So is this working? Yes and no. For the countries that signed this treaty it is working, and the number of nuclear weapons has decreased. But there are other countries that are developing nuclear technology and quickly. Iran is one of them. Iran is a country that is quickly producing nuclear technology and possibly nuclear weapons. Iran having nuclear weapons scares countries that Iran doesn’t have good relations with, most of all Saudi Arabia, Israel, and the United States. So what is being done? The United Nations has openly asked Iran to not produce nuclear weapons. Iran has claimed they are not building them. President Obama has been very clear that he and the Israeli government are on the same page with Iran and their nuclear project; they disapprove and will do what it takes to make sure that Iran does not have nuclear weapons. In an article published by www.bbcnews.com on Sunday February 5, 2012, President Obama said that he wishes to resolve things democratically but will basically do what it takes to make sure nuclear weapons stay out of an already unpredictable area, the Middle East.

So what happens now? If Iran acquires nuclear technology there are a few possibilities. The idea always lingers that deterrence has worked in the past and can still work. Maybe by Iran gaining nuclear weapons it will mean that they will never use them except as a threatening defense, as so many other countries have done. Of course the other members Nuclear Non-Proliferation Treaty could push for Iran to join the NPT and limit their arsenal. And of course there is war, the least wanted of all the political options. A war could possibly rid Iran of nuclear weapons but could cause major catastrophe before that is completed. Perhaps the best bet is to let the world leaders’ deal with it, but the question is whether they will make the best choice.