Washington State Governor Jay Inslee imposed a moratorium, or a suspension, of the death penalty, in February. As a result, there have been extremely passionate opinions from people all over the United States, and across the world about capital punishment. The moratorium will allow Inslee to issue a reprieve to any death penalty case that comes to his desk. Many students at LIU Post believe this newly issued moratorium is a major stride in creating a more progressive nation but some students seem to believe that the complete abolition of the death penalty is not the direction that they want this country to go in. 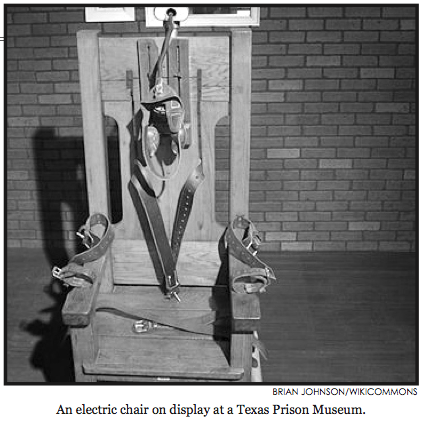 The death penalty draws such intense emotion because it is quite literally the issue of life and death. However, there are a few facts that people should be informed of before making a decision of whether they support it or not.

Another popular public opinion about capital punishment is that taxpayers don’t want to pay to keep an inmate in prison for the duration of their lives. However, a 2003 legislative audit in Kansas found that the estimated cost of a death penalty case was 70 percent more than the cost of a comparable non-death penalty case.

Therefore, these figures pose the question: Does abolition of the death penalty actually lower tax costs for citizens?

However, some students believe that dollar signs and statistical figures should not be the focus of analysis. They believe that we as a people should be more concerned with the moral dilemma that arises from the use of the death penalty.

“The state should be bigger than the individual,” said Shervin Naghibi, a sophomore Film major. Naghibi and his friend Bendik Sorenson, a sophomore Journalism major, are originally from Norway, and staunchly opposed the death penalty.

Sorenson believes that a more humane option to the death penalty is the concept of rehabilitation. The lack of rehabilitation in the penal system contributes to a slew of different factors, such as a person continuously reoffending, also known as recidivism. Recidivism only adds to the strain on the economy, the legal process, and burdens the taxpayers.

However, some LIU Post students are able to view the death penalty from the perspective that if people are willing to commit such heinous crimes, then they should be punished just as harshly.

“There has to be a penalty that shakes you to the core,” said Jenny Edengard, a junior English Writing major. “If the worst thing that will happen to you is that you’re going to spend the rest of your life in prison, then that’s not enough. For some criminals, being in prison is like a vacation. They don’t have to worry about contributing to society or the stresses of paying bills and working a full-time job.”

Some students, including Christina Urbancik, a freshman Pre- Pharmacy major, look at the situation from both perspectives. “If the person has committed multiple, severe offenses like that of a terrorist, then I can understand the use of the death penalty. However, it shouldn’t just be used lightly,” said Urbancik.

Many people would agree with Urbancik, especially because of the recent terrorist during the Boston Marathon on April 15, 2013. Prosecutors are seeking the death penalty against 20- year-old Dzhokhar Tsarnaev, the Boston Marathon bombing suspect. His trial is set to begin on Nov. 3. Tsarnaev is facing over more than 30 federal charges for the bombings that killed 3 people and injured more than 260. According to a Washington Post-ABC News poll, 70 percent of those surveyed favored the death penalty in the Boston case. Elizabeth Emmert, a student at Boston University, who was present at the Boston Marathon during the bombings, knows first hand of Boston’s reaction to such a horrific event.

“Once the bombs went off, [the city] had a totally different vibe,” Emmert said. “I remember people frantically running around trying to find their friends and family and all the phone lines being down.” It was especially tragic for Emmert when she had found out that one of Boston University’s graduate students died from the bombing.

“I don’t know why the bombers did this but I do know that justice was served when we caught the surviving bomber,” said Emmert. “I’m not [pro-death penalty] but I understand why the victims’ families would want to him to be given the death penalty.”

According to the Federal Death Penalty Resource Counsel, only 3 inmates have been executed out of the 74 federal cases where the defendant was sentenced to death since 1988. This number seems low compared to the 16 inmates that were executed on Texas Death Row last year alone. Through comparison it can be seen that the use of the capital punishment varies drastically on a federal to state level, but also a state- to-state level.

In 2004, the New York Court of Appeals held that a portion of the state›s death penalty law was unconstitutional. In 2008, then Governor David Paterson issued an executive order requiring the removal of the state’s execution equipment. Despite the current disestablishment the capital punishment in New York, the death penalty debate is still ongoing for the rest of the nation, as there are only 19 states, with Washington State being the newest addition, that currently do not have the death penalty in effect.

History Professor Willie Hiatt disagrees with the issue of death penalty. “I don’t think that in the age of a modern nation state, we should be in the business of killing our citizens,” he said.