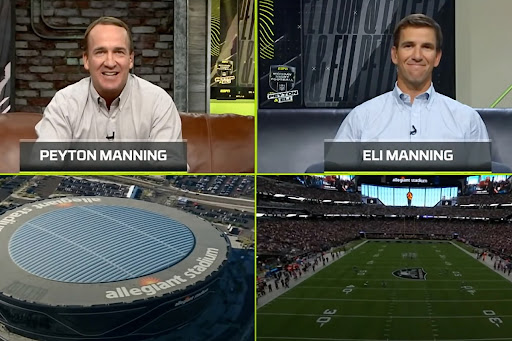 The Future of NFL Broadcasting: How the Manning Brothers are Changing the Sportscasting Industry

ESPN’s Monday Night Football (MNF) broadcasts are shaking up by introducing a secondary broadcast featuring the National Football League’s favorite brothers, Peyton and Eli Manning. Starting this NFL season, the Manning bros will host their own show during 10 of the 16 Monday Night Football games, bringing in guests to help commentate on ESPN’s second channel, ESPN 2. Dubbed the “Manning-Cast,” the show has been nothing but successful and has seen its ratings climb each and every week.

The success of the new Manning-Cast challenges the traditional style of NFL broadcasting and suggests that it may be time for a change. The almost century-old style of broadcasting football games may not be the best way to engage fans in the game anymore, especially the highly coveted younger audience. With the NFL focused on engaging younger and diverse audiences, a new broadcasting style similar to that of the Manning-Cast could be the secret to reaching this target audience. Clearly, the Monday Night Football broadcast between the two beloved NFL legends has the potential to shake up the sports broadcast landscape.

Traditionally, the NFL broadcast consists of a play-by-play man along with a color commentator, with the play-by-play usually being an individual with broadcasting experience, and the color commentator being a former coach or player who can provide insight into the minds of the coaches and players. These two individuals help guide the audience through the game, providing commentary on what is happening while also conveying additional information that might interest the fans.

The MNF broadcast between the two NFL legends is structured a little differently, as the brothers cover the game from separate locations, using a Zoom-style format to connect with each other and the guests. Throughout the course of the game, Peyton and Eli cover the game, analyze the highlights, and interview a variety of guests, ranging from current and former NFL players and coaches. This format gives the brothers more freedom to crack jokes, go off on rants, and entertain the fans without having to stay focused on calling each and every play of the game.

The Manning-Cast has been met with near-universal praise by fans across social media, as many praised the brothers for their on-air chemistry and unique football knowledge.

As stated by Ryan Boettcher, a Junior Broadcasting major at LIU Post, the Mannings provided a more “information-based knowledge towards the game,” while also having that “brother rivalry which led to a ton of comedic moments.” Boettcher admitted that he preferred this Manning-Cast over the traditional ESPN broadcast, citing that the conventional was more for the “casual fan,” while the new broadcast provided “more of a laid back broadcast for the knowledgeable fan.”

While Boettcher and a majority of fans were crazed about the Manning-Cast, some weren’t as intrigued. Like most things, it only takes one Twitter search to find sharp criticism about MNF’s newest broadcast. From brief technical issues to problems with the format and commentating from the brothers, critics had plenty to complain about. Mike Fiorio, an analyst for NBC, went as far as to say the broadcast was “unnecessary” and made the game “generally hard to follow.”

It has been no secret that the NFL has been trying to reach a younger and more diverse audience while also retaining the die-hard fans that help make it the most successful sports league in America. Over the past few years, the NFL has expanded their presence on social media, launching the Playmaker’s Program on Instagram, and expanding their football coverage to Facebook, Amazon Prime Video, and even Nickelodeon. They have also continued their efforts to expand the league globally, playing two games in London this season, and approving at least four international games per year for future seasons.

With the NFL putting an emphasis on expanding their audience, the success of the Manning-Cast shows that the answer to their woes might be in their broadcasts. In its limited time on-air, the Mannings have captivated the sports world and have drawn more attention and viewership each week. This early success indicates that it may be time for a change in the sportscasting industry, as the old way of broadcasting may not be the best way to reach a wider audience.

Bob Costas, a long-time NBC broadcaster, suggests that the Mannings success may not be able to be replicated, as the dynamic between the brothers makes the broadcast so entertaining. Without that chemistry, alternate broadcasts could struggle to reach “the Manning level.”

While Costas may be skeptical, the Manning-Cast has opened the door for a new form of sportscasting and has made a splash in a nearly century-old industry. With the success of the Mannings’ broadcast thus far, the NFL will undoubtedly explore this further, as having alternate broadcasts to their primetime games could be the key to reaching new audiences and expanding the game we love.

While the Manning-Cast wasn’t perfect by any means, the overwhelming amount of praise and media attention shows there is plenty of support, which is a good sign for the future of this new alternate broadcast, and any others that may follow.

Published in Business, Football and Sports