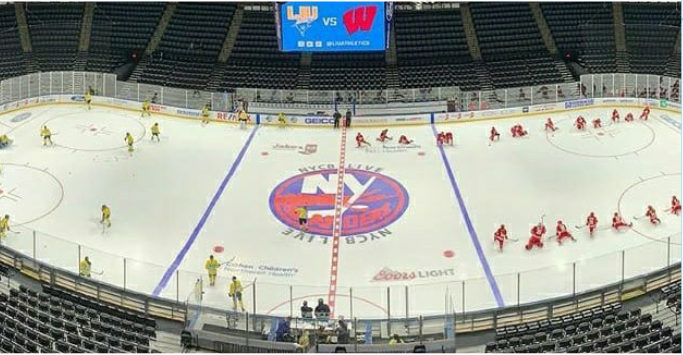 The 2019-2020 women’s ice hockey team is the first in program history, and it is also the first Division I ice hockey program on Long Island. Head Coach Rob Morgan put together a team he believes will continue to make history. “I recruited every kid and everyone was recruited here for a reason, not just to fill a jersey, but to be a part of something special,” he said.

The Sharks opened their season with an exhibition match against a professional women’s ice hockey team, the Metropolitan Riveters. The Sharks lost in a 10-3 battle, however they saw it as a great game to prepare them for the regular season. “Getting that first look at the kind of talent, speed, and strength we will be up against this season was an awesome learning experience,” junior captain Morgan Schauer said.

The Sharks officially kicked off regular season play with two games against University of Connecticut. While the Sharks lost in back-to-back days to the UCONN Huskies, the games showed the determination and potential they have in games to come.

The early season schedule is made up of some extremely challenging games, including reigning NCAA Division I champions University of Wisconsin. The team played University of Wisconsin on Friday, Oct. 18 and Saturday, Oct. 19. Before the game, Coach Morgan said he expected a tough game, but that nothing is decided beforehand. “I know how good they are and our team knows how good they are. But the outcome is determined after 60 minutes. So, we are gonna go out there and play our hardest and give them a good game,” he said.

The Sharks fought hard but fell in both games with the scores of 2-10 and 0-12. However, the team is taking these games as learning experiences, according to freshman captain, Matilda af Bjur. “Playing against the best is an indescribable feeling. We have a way to go to get there, but it is a journey me and the team are ready to do,” she said.

Junior captain, Morgan Schauer, also had a positive outlook on the loses to the Wisconsin Badgers with the belief that these games are “going to make us stronger and help us to build up our program.”

In addition to play against high ranked teams, one of the biggest challenges the team has faced is the youth across the team. Twenty-one out of their 23 team members are freshmen. “It’s a pack of puppies running around,” Coach Morgan said.

Up next for the Sharks is two games against Coach Morgan’s former team, Yale University. The games are being played on Friday, Oct. 25 and Saturday, Oct. 26.