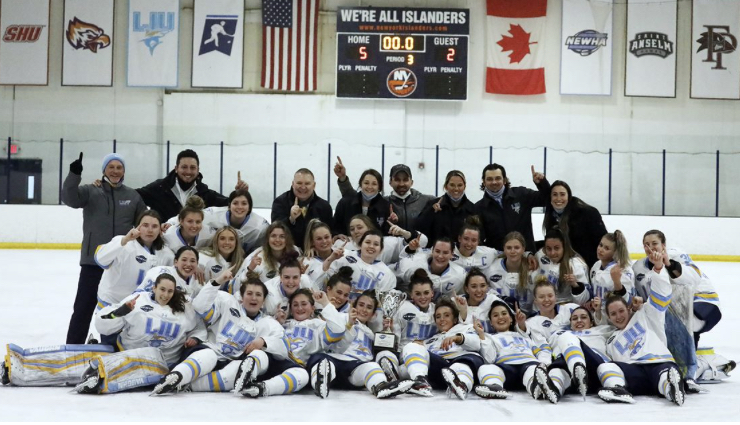 Women’s Ice Hockey secured back-to-back wins in the New England Women’s Hockey Alliance(NEWHA) championships with their 5-2 win over Sacred Heart Thursday, March. 4. This was the second game in a best of three series, with the Sharks securing the win in game one of the series 3-2 in overtime on Tuesday, March. 2.

After winning the conference title in their inaugural season last year, the Sharks were looking to capitalize and prove they could play through all uncertainties of a Covid stricken season. Their season was delayed from the fall of 2020 until the start of 2021.

Head Coach Rob Morgan was excited when he found out the Sharks would have a chance to defend their title after the long wait.

“Having the opportunity to compete for a championship is the key motivating ingredient for our team,” he said. “When we found out that we could have an abbreviated season that would conclude with a best two of three playoffs, it was exciting news for everyone involved.”

Despite the awkward shortened schedule, Morgan clarified he and his team focused on the things they had to, without worrying about the outside circumstances.

“We focused on the things that were in our control. Early on, we truly learned what it meant to be adaptable, from doing zoom video sessions to review/learn team systems to being creative with the small group workouts,” he said.

The Sharks had a rough start to the season, losing their first five over their non-conference opponents. Morgan made clear these were learning battles that helped defeat Sacred Heart when the time came.

“Our plan has always been about getting better each day. We know that it’s going to take time to beat the Nationally ranked opponents. With that being said, we need to play them to measure our growth as a program,” he said. “Our team understands the importance of learning from the past so that we can be stronger in the present. This mindset and their positive energy is what allows for the team environment that we all enjoy.”

“Winning the NEWHA championship back to back is special for so many reasons. Not only is it our second championship in just two years of the program, but we did it all under such unique circumstances. This season our team was lucky enough to be able to train and play fairly regularly with only a few bumps along the way,” she said. “There are teams that did not have the opportunities we had this year to play, so to be able to finish the year raising another cup is second to none.”

Once again, Harmison repeated her stellar performance in the NEWHA championship tournament. By only allowing two goals each game against Sacred Heart, she put her team in a great position. Last year she had three consecutive shutouts in the tournament.

“Being given the opportunity to start such important games is what really fuels me to perform. My coaches and teammates have the confidence in me to perform my best and give them a chance to win each game,” Harmison said. “Your energy just peaks at that first puck drop, and then you control everything you can from there to help your team until you can raise the cup after the final buzzer.”

Defenseman Julia Hoffman played terrific with two extremely timely goals. She secured the victory in game one with the overtime winner, and followed it up with the go-ahead goal early in the third period.

“In both situations, I feel like everyone’s anxiety was high because all we wanted to do was win, but after scoring both of those goals, it was like a stress reliever,” Hoffman said. “It felt as if a weight had been lifted off of our shoulders, and it was an overwhelming feeling of emotions for not just me but the whole team.”

Throughout the season, Hoffman focused on playing to her strengths and was confident in her team’s ability to compete through anything.

“I wasn’t worried about the uncertainties in the beginning because I was confident in my coaches’ choices and plan for our season,” she said. “Winning the NEWHA back to back is just an unbelievable feeling. I already had a feeling that we would win because I know my team and coaching staff’s capabilities, and I believe that we could accomplish anything if we put our minds and skills to it.”

Matilda af Bjur had one of the greatest offensive performances in team history during game two with a hat-trick in the 5-2 win. The first goal in period two tied the game at one and gave the Sharks the momentum they needed to capitalize. Her next two goals in the third secured the victory and the title.

Matilda was the team’s third-leading goal scorer last year with 10, but with only one goal so far this season, she was due for a huge game. Bjur was proud to be able to contribute the way she did when it mattered most.

Bjur feels it is a big accomplishment to represent LIU every time they take the ice.

“It is, of course, a huge accomplishment for all of us on the hockey team and the school. It shows that we can do whatever we set our minds to even during this difficult time and that we are ready to take the next step in making this program even greater,” she said. “If we can do this, we can really do anything, and I think our team is ready to do even greater things now.”