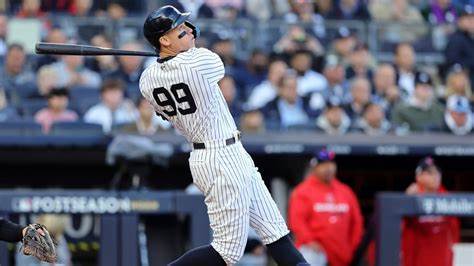 The 2022 Major League Baseball season has concluded. This immediately leads into the MLB offseason, which brings about all the free agent signings, trades and any other roster moves made by every major league club.

The Yankees and Mets have both been at the forefront of much of the coverage surrounding offseason news. After breaking the American League home run record and being named AL MVP, Yankees superstar Aaron Judge became a free agent following his first six seasons in pinstripes.

On Wednesday, Dec. 7, it was announced the Yankees and Aaron Judge agreed to a 9-year deal worth $360 million.

This is the third largest contract in baseball history, only trailing extensions given to Mike Trout and Mookie Betts. It is also the largest deal ever for a free agent.

Just one night prior, MLB Network insider Jon Heyman reported Aaron Judge was headed to the San Francisco Giants, but immediately corrected himself after jumping the alert.

After the announcement of Judge returning to the Bronx, it was confirmed Aaron Judge turned down a 10-year deal from the San Diego Padres worth $400 million. The Average annual value (AAV) from the two offers is the same at $40 million. However, Judge would have received an extra year had he accepted the Padres’ offer.

“One of the Yankees’ top priorities, much like how it was of the utmost importance, was to re-sign Judge,” he said. “The face of your franchise and the AL MVP had to be back in the Bronx, especially after he hit 62 home runs and broke the American League home run record.”

Hines believes Judge should be named captain to secure his legacy as a career Yankee.

“I would expect the Yanks to give Judge the captaincy. They made the commitment, he’s a Yankee for life, now let’s give him that honor,” he said.

Hines is happy with the acquisitions the Yankees have made so far but would love a couple more pieces to be brought in.

Besides Tommy Kahnle, the Yankees have brought back Anthony Rizzo and Judge. I wouldn’t be surprised if we land Carlos Rodon to pair him well with Gerrit Cole in our rotation,” he said. “I wanna say we’ll make a sneaky run at Dansby Swanson. I just have that feeling.”

On the other side of the Whitestone Bridge, the Mets have been making many acquisitions as the third offseason of Steve Cohen’s ownership continues to bring high hopes to fans.

This is similar to the 3-year, $130 million deal the Mets agreed to with Max Scherzer last offseason. Currently, the Mets have both Scherzer and Verlander for the next two years, each making $43,333,333. With Scherzer now 38 years old, and Verlander heading into his age 40 season, it is clear the Mets will try and get the final productive years out of the veteran starters.

“My top priorities were retaining our guys, especially Edwin Diaz, Brandon Nimmo and DeGrom, while also looking for hitters and bullpen help,” he said.

Following his incredible 2022 campaign, which featured 32 saves and a 1.31 ERA, the Mets brought back their closer Diaz to a 5-year, $102 million deal with a 6th-year club option.

Campbell believes it was crucial for the Mets to make the signings to keep their pitching at a top-tier level.

“It was huge to get Verlander and Senga. After DeGrom and Walker left, I wasn’t sure where we would pivot to, but Steve Cohen and Billy Eppler were able to go all out to win over some of the best pitchers on the market,” he said. “Verlander may be older, but he is still one of the premier pitchers in the game, and Senga has superstar potential. Those two moves were very important after losing DeGrom and Walker.”

The Mets also re-signed outfielder Brandon Nimmo to an 8-year, $162 million deal following his seven seasons in a Mets uniform. Campbell believes bringing back a home-grown talent was a great move.

“Nimmo has always been an important player on this team. He may not be a superstar, but the type of way he plays is very unique. He is a very consistent and disciplined hitter, and he is always reliable in the outfield,” he said. “He’s always the hardest worker, and you can see how much he loves being a Met. He is a fan favorite, and I think he can play a crucial role in this team’s pursuit of a championship.”

Campbell has high hopes for the Mets’ future following their moves so far.

“I am very happy with what has been done thus far. I still think they need another big bat or two and a few more bullpen arms, but overall I am pleased and very excited for the 2023 season and beyond,” he said.