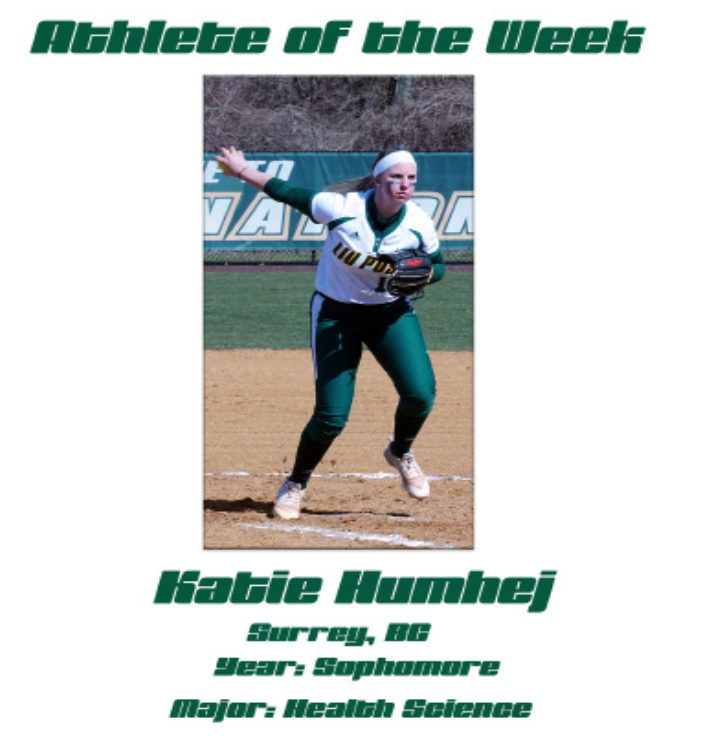 Athlete of the Week: Katie Humhej

Katie Humhej, a sophomore health science major from Surrey, British Columbia, pitched in her first home game of her sophomore year on Saturday, March 17 when she pitched all five innings against American International College. She had four strikeouts and only allowed one run.

In her current year, despite her 1-5 record coming into Saturday’s second game of their double-header, Humhej said, “ I think I just started to settle in to the feel of competing outside in a game again. We’ve been indoors practicing for so long due to the weather that sometimes the change can be difficult, especially in the cold weather.”

The softball team played eight games in Clermont, (Fla.) where she pitched in four of those games to begin its season. Humhej adjusted to the change in weather for the team’s home opener. “It was very difficult compared to pitching in warm weather,” she said. “we had to continuously keep warming up between innings to keep our arms going so that we wouldn’t stiffen up.”

Following junior health science major and sports management minor, Hannah Olshevski’s strong pitching performance in game one, Humhej’s exceptional pitching performance in the second game of Saturday’s double-header was able to help the Pioneers sweep American International College, give them a 2-0 record at home and improve her own record to 2-5.

Published in Softball and Sports