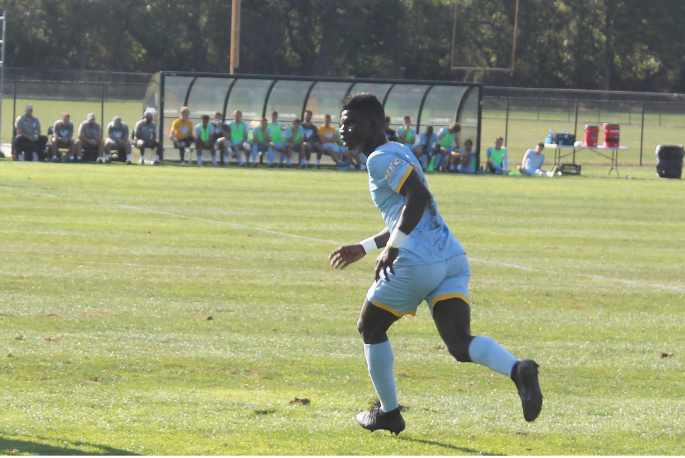 Athlete of the Week: Papa Ndoye

After scoring two goals and helping the Sharks shutout the Bryant University Bulldogs 2-0 on Monday, Oct. 28, men’s soccer freshman forward, Papa Ndoye was named NEC Co-Rookie of the Week for the second time this season.

Ndoye is proud to be recognized in this regard, but also humbly admits that everything he does on the field is for the betterment of the team. “Soccer is a collective sport,” Ndoye said. “Every time I’m on the field, I try to do my best to help my team, so if I have the privilege to be noticed in that collective, it’s always a pleasure.”

The rookie continued his scoring streak on Friday, Nov. 1 against Robert Morris University by adding one goal to the board in the 3-0 victory.

With a total of seven goals so far this season, the freshman plays an important role on the Shark’s offensive end. “If he [Ndoye] can start scoring in bunches, we’ll make a nice little run. We have a better chance,” Head Coach Michael Mordocco said.

With one game left in the season, the Sharks have clinched an NEC playoff spot, becoming the second Shark team to appear in the NEC championship tournament. The Sharks will play their first playoff game on Friday, Nov. 15, with the location and opponent to be announced.

Ndoye is very excited about his team’s chances in the playoffs and the possibilities of them winning the tournament. “I will be really proud for the team because it’s our first season and making that performance will be just incredible.”

This is a year of firsts for the Rookie of the Week. It is Ndoye’s first NEC tournament appearance and his first time playing soccer in America. Ndoye is an African native from Mbour, Senegal. He said the transition to America and the differences from home are things he had to go through and experience to be “a proper soccer player.” He said that no matter where he goes, it’s imperative that he adopts the style of play, no matter the city, state or country.

Ndoye was introduced to Coach Mordocco by a friend from home who played with Mordocco in college at the University of Connecticut. Ndoye’s favorite thing about LIU is getting to play soccer every day. “Soccer is my passion,” he said.

Ndoye loves being a Shark as well. “It gives me more energy I can say, every time I hear the name ‘LIU Sharks,’ I feel strong and [powerful].”

Ndoye and the men’s soccer team play their last regular season game against St. Francis Brooklyn at home on Sunday, Nov. 10 at 1 p.m.