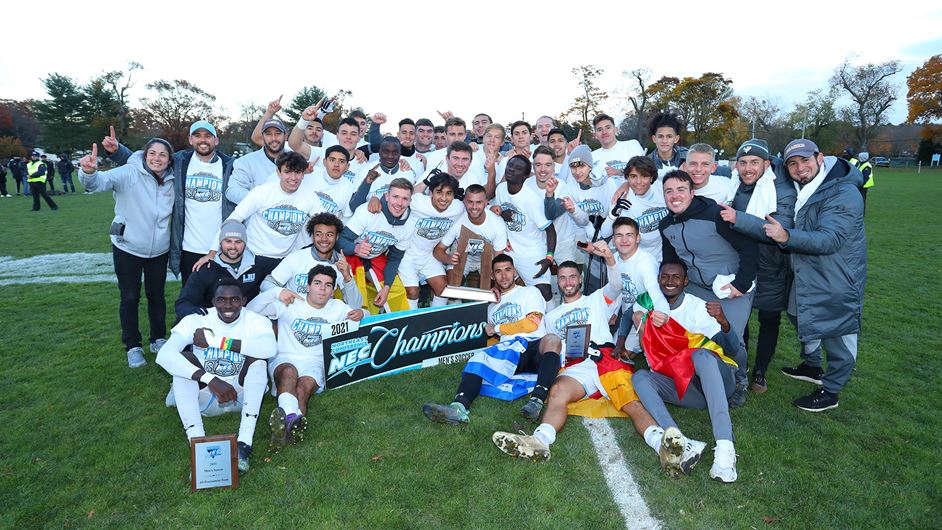 The LIU Men’s Soccer team finished their regular season with a Northeast Conference (NEC) Championship ring. They then beat the University of Maryland Terrapins on Maryland’s own field in the NCAA Division I Men’s Soccer Tournament, earning their way to the second round against the Saint Louis University Billikens, where they fell 5-1 on Nov. 21.

“It was definitely one of the most stressful games that I have been to, and since this year, we are actually allowed to watch in person instead of on a screen. That just made the experience more intense,” Takagi said.

The first game that LIU played in the NEC tournament, the Sharks kept their fans on their toes when playing against Bryant University at home on Friday, Nov. 12. After the game’s second overtime, the game went into penalty kicks, where the Sharks took the victory 5-4, with the game-winning kick coming from sophomore forward Emil Jaaskelainen.

Junior defender Aiden Wilson feels that having support from their fans in the stands was really important for the players on the field to keep the energy up while playing.

“We are very thankful for everyone that was able to come and support us. Hearing the cheers in the stands really makes our experience better, as well,” he said.

With this being graduate student midfielder Julio Abad’s last season with the team, he is proud to be a part of this team and that they were able to accomplish their mission and what they had worked so hard for all season long.

After winning what the Sharks had worked so hard to achieve, they were able to advance to the NCAA Tournament, where they played their first game against the University of Maryland in College Park, MD, on Nov. 18. The Sharks won 1-0 with an incredible shot by forward Assane Ben Fall with less than two minutes left in the second half.

Junior business major Amanda Loo had the opportunity to take a bus provided by LIU to Maryland with a couple of other Shark soccer fans, and she explained that her experience was incredible.

“Before we had scored, I thought for sure we were going to go into overtime. Once we had won, only a couple of Sharks’ fans were with us, but it was so great to celebrate the victory with fellow LIU students,” she said.