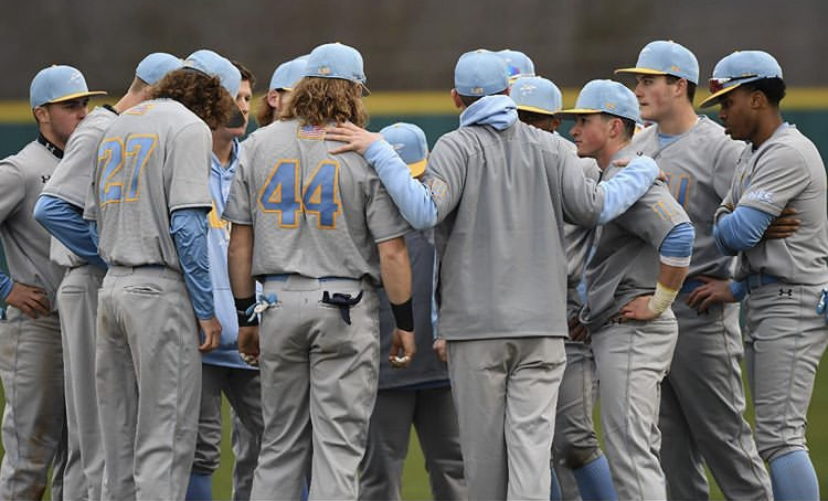 The Baseball team’s 2020 season was cut short due to the new coronavirus. They went 5-7 in non-conference action before the NCAA announced all remaining winter and spring sports were canceled on Thursday, March 12.

The team’s first conference game was set to be against Wagner on Friday, March 20. The Sharks struggled early on in the season, losing six of their first eight games, including three out of four from Nicholls State, but they went on to sweep St.Peter’s University in their first home series.

NCAA athletes took a devastating hit due to the cancellation, particularly seniors who were left to decide what their future holds. The NCAA rightfully granted an extra year of eligibility to all spring athletes, but many on the baseball team are unsure about the logistics of their situation around this extra year.

Jackson Svete is a starting pitcher who played for the Blackbirds in the last three seasons. Svete believed there was a ton of potential with the Sharks early on.

“Talking to my teammates from Brooklyn, I knew it would be a big leadership opportunity,” he said. “I knew we would be very successful, Post and Brooklyn players got along very well.”

Svete was disappointed to hear the season was cut short, right as the Sharks were coming off a sweep against St.Peters.

“I think that was the worst part when we played Nicholls State. Two of those three losses we were right in the game,” Svete said. “That weekend after St.Peters, we were playing great baseball. I thought we were a contender in the NEC.

Svete will be coming back to play his final season with the Sharks next year, and knows he will need to work hard to continue his performance after a long offseason.

“Individually I have to work as hard as I was leading up to this year,” he said. “We all must maximize this time off and be just as strong as were this year.”

Rob Griswold is a relief pitcher. He spent his last three seasons on the Blackbirds as a two-way player, both pitching and playing the infield. He decided to focus on his pitching only this year so he could improve his game on the mound.”

Going into his final collegiate season as a Shark, Griswold was looking to repeat what he achieved in Brooklyn two seasons back.

“I was looking to win another conference championship,” he said. “I think we had the potential to do so and we were all willing to do what it takes to get there.”

Griswold said the worst part about a canceled season is that there were guys on the team that they played with for the last time without even knowing it; however, despite all of this, there are things to take advantage of going forward.

“I think this situation gives us a unique opportunity to prepare for next season and appreciate any time we get on the field,” Griswold said. “It makes us realize what we have been taking for granted and helps us also realize that it can be taken away at any time.”

Anthony Warneke is a graduate student and the starting shortstop for the Sharks. He transferred to LIU Brooklyn for the 2018 season, and immediately became a starter. He redshirted in 2019 after having a season-ending injury only three games in.

“It was a tough pill to swallow, but when things get tough you just have to push through and do the things necessary to get back on track,” Warneke said.

Knowing he would play his final collegiate season as a Shark, Warneke said he aspired to win the NEC championship, and then continue his baseball career at the professional level. He was off to a great offensive start this season, leading the NEC in batting average with .438, and on-base percentage with .491. He was also seventh in the NCAA, averaging .75 stolen bases per game.

Warneke never expected his collegiate career to end this way, especially after he was having an outstanding offensive season, and when the Sharks were putting together great team performances.

“It’s not what I had envisioned for my final collegiate season, but I think I was at a great spot,” Warneke said. “I think it’s something that I can build off and take into my next season.”