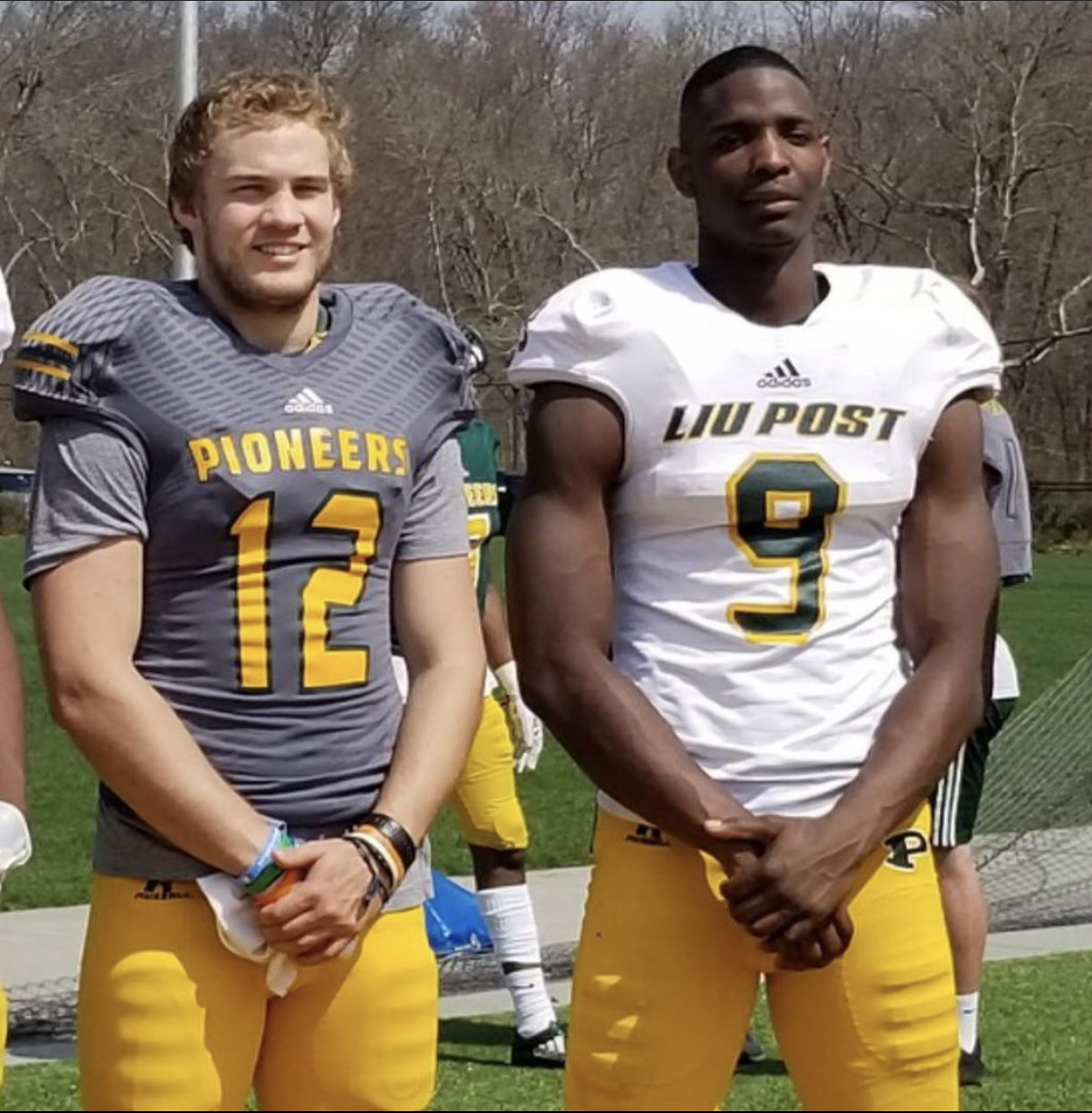 Clayton Beathard: How He Left His Mark

Over winter break, with heavy hearts and overwhelming sadness, the campus community mourned the unexpected and tragic death of student, friend and teammate, Clayton Beathard. He was 22 years old.

Described by some as selfless and spiritual, Beathard sacrificed himself in life and on the football field as the Sharks’ starting quarterback. He transferred to LIU as a junior from Iowa Western Community College in spring 2019 and began playing for the Sharks in their inaugural season in fall 2019.

“Clay was a passionate person who wasn’t afraid of a challenge,” fellow teammate and senior broadcasting major, Derick Eugene, said.

Despite his short time at the university, Beathard managed to impact his teammates, coaches, athletes and others in the community in a tremendous way, according to Bryan Collins, head football coach.

“One of the things we often talk about as coaches of athletes is to try to get our athletes to leave their mark, so that people know that you are there, and that you have made a difference,” he said.

When the season got rough, and odds were against them, Beathard made his presence known by lifting the team up. “I have been coaching for 20 years. I also was an athletic director for 10 years here, and in dealing with thousands of athletes and hundreds of coaches, I have never seen anybody make such an impact in such a short period of time here,” Collins said.

Beathard’s loyalty, positive attitude and engaging personality were some of his strongest attributes, according to Collins. He always wanted to stand up for his teammates. He was a man of inclusion, always paying attention to as many players as he could and wanting people to be seen.

Beathard also impacted his teammates through his toughness and commitment to the game which showed Collins, “how committed he was to playing and being a good teammate,” he said. Even though he was injured during the season, he was determined to play and give his all for the team.

Beathard appeared in seven games while playing for the Sharks before being sidelined for a shoulder injury. He completed 52 percent of his pass attempts (94-for-182), throwing for 1,071 yards and four touchdowns, according to LIU Athletics.

“The team will miss the energy and love he brought to the team,” Eugene said. “He sacrificed a lot for us as he battled through tough injuries. He left it all on the field for us.”

But, there was much more to admire about Beathard than his football career. His older brother C.J. Beathard, who is also a quarterback for the San Francisco 49ers said he remembered his brother as a loving man of faith.

“He had the biggest heart of anybody I’ve ever known,” C.J. Beathard said in a dedication to his late brother on Instagram. “You could know him for 10 seconds and you would say, ‘This guy is a good guy.’ He just loved everybody. He was a good kid and a good person. He would do anything for the people he loved, his friends, his family. He’s as loyal as it gets.”

Beathard was also a devoted brother to singer/songwriter Tucker Beathard and his two sisters Charly and Tatum Beathard. He was the son of country music songwriter Casey Beathard and mother Susan Beathard, as well as the grandson of Hall of Fame NFL executive Bobby Beathard.

Collins described how Beathard, from what he had gathered, played a special role in his family even though other members of the Beathard family may have been more publicly recognized at the time.

“He was the one that had the special smile and quality, and his brothers who were older, really looked up to him as the motivating force in their careers,” Collins said.

In a statement given to The Tennessean on Dec. 21, his family acknowledged the astounding love and support received from those who loved their son.

“We cannot possibly thank you at the rate they come in texts and phone calls. Clay was an amazing, big and softhearted human being with an undeniable love for the Lord. He had his family’s, friends’ and teammates’ backs even to a fault. I wish he would have been more inclined to take the high road but he hated ‘wrong.’”

Beathard was of strong faith, and the idea of him attending school in New York worried his parents a bit. They were concerned he wouldn’t be able to practice his religion as he did while living at home; however, he maintained his faith, and in fact, deepened his spirituality while at Post.

“Speaking to his dad, it [the move to LIU] really was a blessing; he really embraced New York,” Collins said.

Beathard was heavily involved with a Bible study group that met after the football team practiced on Sundays. He grew his own faith alongside other athletes who practiced their faith too. Pastor Todd Bishop, who according to Collins, became like an adopted pastor to the team, also joined them in prayer.

Beathard became his team’s symbol of faith which is something they will miss.

“I think that really affected his teammates. [They] saw him as a person of faith, and you know, maybe that’s why he was so special, because of his faith. So we sorrow a sense of that as well,” Collins said.

Upon returning home to Tennessee for the holidays, Beathard was fatally stabbed outside a Nashville bar in the early morning of Dec. 21. He was with hometown friends Paul Trapeni lll, 21, who also lost his life, and AJ Bethurum, 21, who survived but sustained injuries to his eye and arm. All three attended high school together.

Beathard’s memorial service was held in Nashville, Tenn. the weekend after Christmas. Coaches from the football team, Athletic Director William Martinov, Pastor Bishop and around 20 Shark athletes attended the candlelit vigil to represent the school and show support to their quarterback’s family.

During the service, a montage dedicated to Beathard was presented while the song “Free Bird” by Lynyrd Skynyrd played in the background.

“It [the song] starts by: ‘If I leave here tomorrow, would you still remember me?’ and that’s an interesting sentence,” Collins said. “He did leave his mark here.”

After Christmas break, the athletic department, coaching staff, Pastor Bishop and The Center of Healthy Living offered their support to grieving students and athletes. The football team held meetings where players and coaches shared their thoughts.

“We spoke about Clay,” Collins said. “We were able to spend time together.”

Usually, coaches and staff within the athletic department get to spend four years with student athletes. Collins expressed sadness in not having the chance to do that with Beathard.

”I wish I would have gotten the chance to get to know him a little bit better,” he said. “It just seems like he was a very special guy, and I would have wanted to spend more time with him.”

Even though Beathard is no longer with his team, he left thoughtful lessons behind for them to hold on to, according to Collins.

Some of the players admired Beathard’s relationship with his younger sisters, and it influenced them to talk with their own siblings more often. Collins was also touched by past conversations with Beathard.

“I learned something new that I’m willing to do differently moving forward.,” he said. “He has left us with little things that are constant reminders of how we should try to live and how to be together.”

To pass along Beathard’s legacy, each year, his jersey number will be given to a player who shows similar attributes as Beathard in terms of attitude and loyalty.

“That will become a tradition for us moving forward, to kind of always leave his mark,” Collins said.