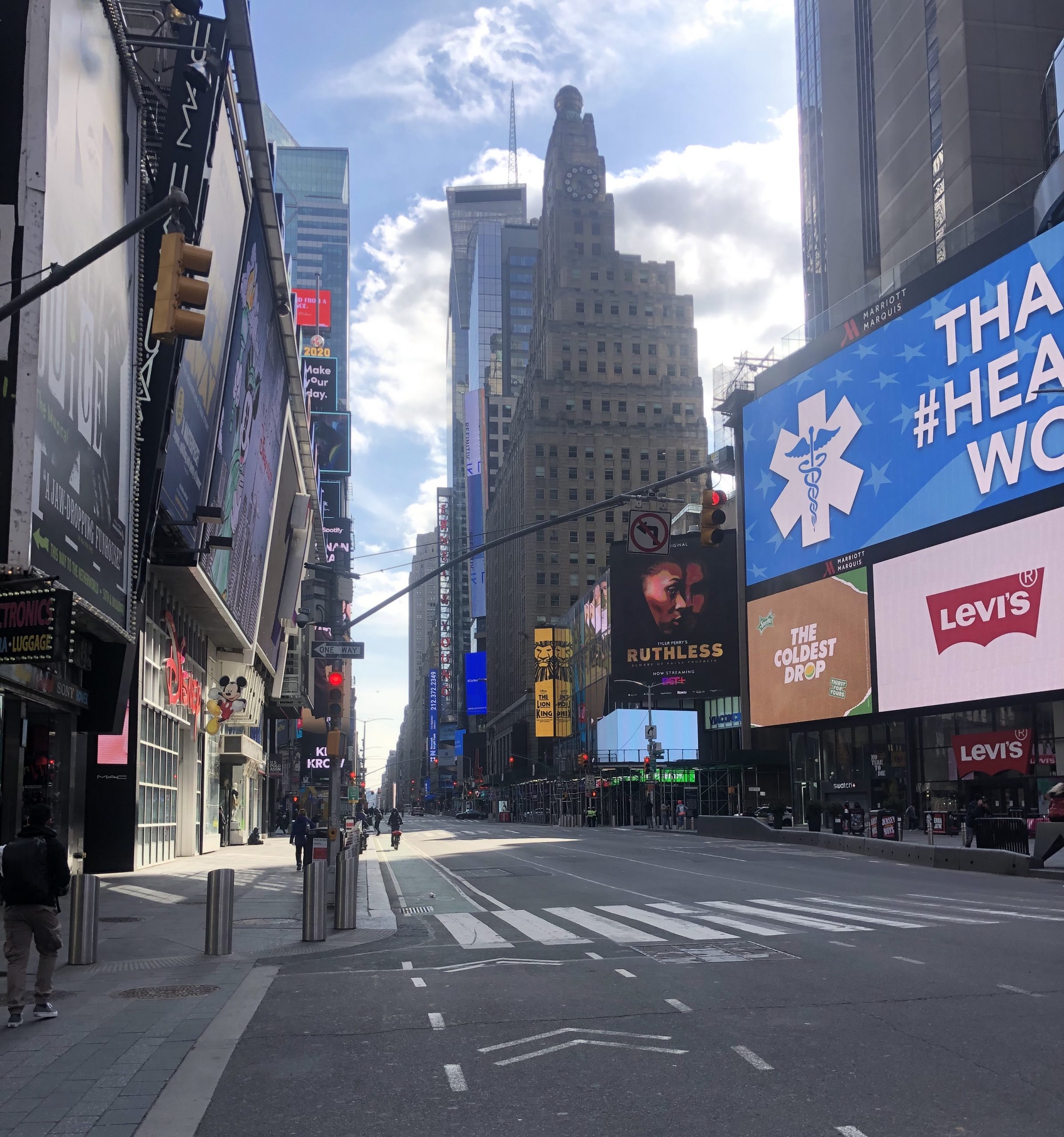 Since The Pioneer last reported on COVID-19 on Feb.26, the new coronavirus became a pandemic, placing life on pause, and significantly impacting the daily routine of college students and faculty all over the country.

COVID-19, better known as the new coronavirus, is described by the World Health Organization (WHO) as the infectious disease caused by the most recently discovered coronavirus. This large family of viruses tend to cause illness ranging from the common cold to more severe diseases.

The most common symptoms of the virus, which are fever, tiredness and dry cough, haven’t changed since the virus began to spread, according to WHO; however, symptoms such as aches and pains, nasal congestion, runny nose, sore throat or diarrhea were recently added to the list.

Several ear, nose and throat doctors from various locations around the globe, warn they may have discovered a new hidden symptom called anosmia—the loss of sense of smell and taste–even in those who may be asymptomatic, according to reports by Forbes, The Washington Post and The New York Times.

The disease doesn’t discriminate, affecting every race, gender, age and occupation, according to Brianna Lobianco, a senior health sciences major who works at a health clinic.

“Most cases of COVID-19 show symptoms no different than the flu,” she said. “This pandemic is affecting everyone.”

Currently, Brookville has a total of six confirmed cases, according to the Nassau County Department of Health. The university reported one positive case on campus—a faculty member who reported being in both Pell Hall and Kahn before getting tested. Both buildings are temporarily closed and are scheduled to be disinfected in accordance with guidelines set forth by authorities.

“I don’t think anyone could have predicted the situation we are in right now, however, it’s good that they’re taking every precaution they can do to keep people safe,” Margaret Levin, junior musical theatre major, said.

All residence buildings remain open to accommodate those who live on campus and chose not to return home. Like many other schools and universities, LIU determined that moving classes online was a step necessary to keep students safe and healthy.

“Since it’s been confirmed that a member of the LIU community has tested positive for the coronavirus, I don’t think it would be safe for students to have to go to class right now,” Angela Barone, junior marketing major, said.

“The outbreak has actually affected a lot of aspects of my life,” Barone said.

Not only was her spring break plans canceled, but her daily life changed as well. Due to the confirmed case on campus, she said people are hesitant to go out.

“I’ve been spending a lot of time at home,” she said.

Although the new coronavirus is a global issue, for many students, the situation is anecdotal, especially in New York where there are almost 30 times more cases than any other state.

As the number of cases continue to rise, primary protective equipment for healthcare workers is quickly diminishing. Gov. Cuomo expressed his frustration with the Federal government’s lack of response to the state’s growing need for ventilators and hospital beds.

“I will turn this state upside down to get what we need,” Gov. Cuomo said during a press conference on March 24.

New York hospitals must increase capacity by 50 to 100 percent, as it is presumed that up to 140,000 hospital beds will be needed.

“The cases in New York aren’t higher because we’re New Yorkers,” Cuomo said, “I’m asking you to help New York so you can help yourselves.”

Changes such as taking courses online, while also adjusting to a social-distancing lifestyle, make both Levin and Barone concerned. Virtually communicating with classmates and professors is a difficult task when a student is accustomed to learning a certain way.

“I also take an advanced taxation course which is pretty challenging already, so I’m nervous it’s going to be even tougher if I have to read the material on my own without a lecture from my professor,” Barone said.

LoBianco, who in addition to attending school also works in healthcare, said she’s afraid of how online classes will affect her ability to grasp the material.

“I learn best with demonstrations and being hands on, but I understand that this is what’s best for my safety right now,” she said. “I am a science major and most of my courses have lab portions along with their lectures. I’m not sure how I will be able to do experiments online.”

In cancelling face-to-face classes, many out-of-state students went home, including Levin who’s homebound for now but left many of her belongings in New York.

“I’m currently living out of the suitcase I brought home for spring break,” Levin said.

Sara Wally, freshman musical theatre major, also decided to go home. “Being from out of state made the entire situation of moving out and grabbing my stuff 100 percent more stressful because there was a possibility that at any given moment domestic travel could come to a halt and borders would be shut down.”

The university requested that many students who study abroad also return home, while also cancelling many planned study abroad trips.

Barone was supposed to attend the fashion merchandising trip to London before it was canceled. She said the school made the right choice in cancelling the trip because conditions continue to worsen by the day.

“Confirmed cases of coronavirus in the UK are getting up, and travel restrictions are getting stricter, so who knows if we would have been able to get home safely,” she said.

In a public address delivered from the Oval Office on March 11, President Donald Trump announced a 30-day ban on anyone traveling from a list of 26 European countries, excluding the United Kingdom and Ireland, who were added to the list just days later. U.S. citizens are allowed to come home but only into 13 designated airports with advanced screening efforts. The European Union announced on March 17 that they are also restricting nonessential travel into Europe for 30 days.

Jacqueline Duncan, junior business administration major, was in Australia with the LIU Global Australia program when COVID-19 began to spread. The outbreak first affected her when their trip to Bali to collaborate with students at the Balinese Institute was canceled.

While overseas, Duncan also noticed that remote indigenous communities started to fear outsiders coming into their area. In reaction to the virus, Australia began to cancel flights.

“While our surrounding area was significantly less exposed to the virus than many of our hometowns, it became clear that if we didn’t leave now while we could, we would have a very difficult time leaving once the semester ended,” Duncan said.

The Australia program was one of the last to be advised to return home because of the minimal impact in North South Wales. Students were given the choice to take classes online once they came home.

Duncan had minimal trouble flying back, but reported other students experienced trouble.

“Students who had layovers in New Zealand lost their flights once New Zealand closed its borders to all foreign flights,” she said. “This cost them extra travel expenses and stress as they scrambled to find new flights in such short notice.”

Some students were amidst thesis projects and internships when the new coronavirus suddenly placed everything on hold.

Robyn Beeber, a senior childhood special education major, was in the middle of student teaching before the state ordered everyone to social-distance themselves until further notice.

“Now I have no idea what happens next, whether schools will reopen soon enough, if I will have to stay after graduation, or if I will have to complete student teaching next semester,” she said. “I have also lost my job as a waitress, as all restaurants are forced to do pick up or deliveries only. I had to file for unemployment to keep some sort of income to support myself for necessities like food.”

Social-distancing is defined as intentionally creating space between you and others in order to avoid catching a virus or disease. Examples of social-distancing are working from home, visiting loved ones virtually instead of in person, and avoiding large groups of people and gatherings.

Anxiety has become a common feeling shared by students as they adjust to their new way of life. LoBianco said the outbreak affected her personally as well by creating unneeded stress. She works in healthcare and risks being exposed to the virus each time she goes to work.

“I deal with patients hands-on who may have been exposed or have concerns for it,” she said. “Then I go home to my family at the end of the day and they get worried and are concerned for my health and safety, as well as their own,” she said. “

LoBianco, who is a senior expected to graduate this spring, is disappointed her senior year of college ended abruptly.

“I’m not sure what the plans are for graduation which breaks my heart. My last semester of undergrad has completely changed,” she said.

Seniors were met with the unexpected situation of saying goodbye to college and high school months before expected. Even some freshmen were met with unfortunate circumstances as their first year on campus was cut short.

“What sucks the most is the fact that I won’t get to have my freshman year showcase for Post Theatre Company, which is something that I’ve been looking forward to all year,” Wally said.

As students learn to accept their new lifestyle a midst all the chaos, they’re also trying to remember to keep a six-foot distance between themselves and others, avoid touching their faces and to cover their mouths when they cough.

“Hand washing with soap and water for 20 seconds is everything right now. Stay inside if you are feeling under the weather,” LoBianco said. She also added some advice for those who may feel ill. “Reach out to your primary care physicians, or feel free to call your local urgent care clinic. You don’t need to stock up on toilet paper.”