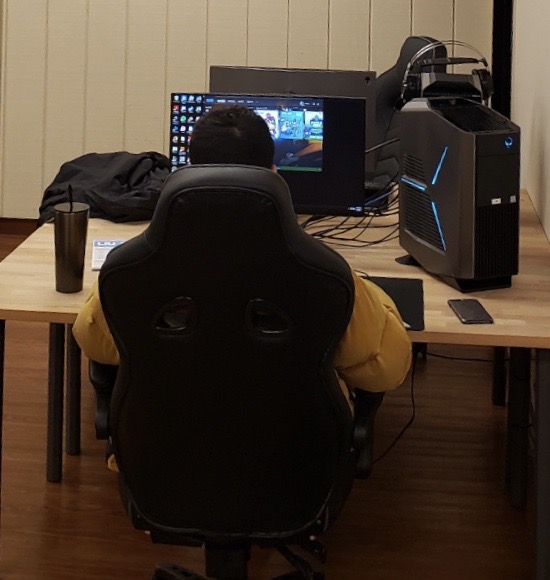 If students go upstairs in Hillwood and walk toward the location of the Pavillion, they’ll notice a room with the door propped open. If they peer inside, they will see a couple of computers or people standing and talking while watching people play games on the
computers. What they’ve found is Hillwood 259, or as it’s known amongst the gamers on campus, the new esports arena.

The arena recently changed locations to a more central spot compared to its previous location, room 226, the semi-circle shaped room in Hillwood above the concierge desk.

The new room sports six Alienware Aurora R7 PCs with Intel i5 8400 cores, each with a Logitech mouse and a 240Hz monitor, which makes for a well-equipped gaming setup, according to esport enthusiasts. In addition, the computers are hard-lined, which makes for minimal lag while playing online.

“The esports arena was moved because the esports program has surged in popularity,” John McDermott, the esports coach, said. “The new room has so much more space and there is a lot that can be done with the room.”

The new arena now has a pair of couches that students can sit on while waiting for a computer to open up or to simply watch other students game. Others use them to lounge with friends or catch up on schoolwork.

Students who use the room,such as Maqueisha Tierra Gillett, a sophomore business management major who is a member of the “Fortnite” team, are enjoying the change of venue.

“I enjoy the new room,” she said, “It’s better for spectators to watch, or if we just want to hang out and enjoy the company of our teammates.”

But not everybody has grown to like the new room. “It isn’t a proper place for them to dump us into,” a varsity team member said. There are a total of six computers in the arena, which according to team members, is just enough to play “Rocket League 3v3’s” and nothing else. “Rocket League” 3v3’s are a 3-on-3 contest between two teams in the video game. The team members also noted the volume of people, sometimes as many as 16, who visit the room during common hour. With only six computers available, it’s extremely difficult for teams to practice together because they can’t kick off other varsity players who are also practicing.

Vice President of the Esports Club, Tim McIntyre, a senior game design major and a member of the “Hearthstone” team, expressed that the new room has potential to be a real focal point for gaming and esports on campus but a few issues need to be addressed first.

“The current issue with it is the lack of computers…and the TV’s have not been transferred over yet,” he said, referencing the six TV monitors from the old room. Each served as a live feed from a corresponding computer, allowing spectators to watch from anywhere in the room.

The old room had six desks pushed together, each with its own PC, monitor, keyboard,
mouse, and headset, creating a gaming conglomerate. Now, in the more spacious room,
each desk is separated, creating six different gaming areas.

This is too much room for some varsity members. Andrew Serken, a junior history and philosophy major who also plays for the “Hearthstone” team, noted that the old room “felt more teamly” and that he “liked how close all of the PCs were.”

Coach McDermott didn’t comment on the need for additional computers or what will be
done with the extra space in the room. However, he enjoys the extra space and believes it will benefit the arena moving forward. “There is a lot that can be done with this room,” McDermott said, “It presents a great opportunity to really grow the program.”