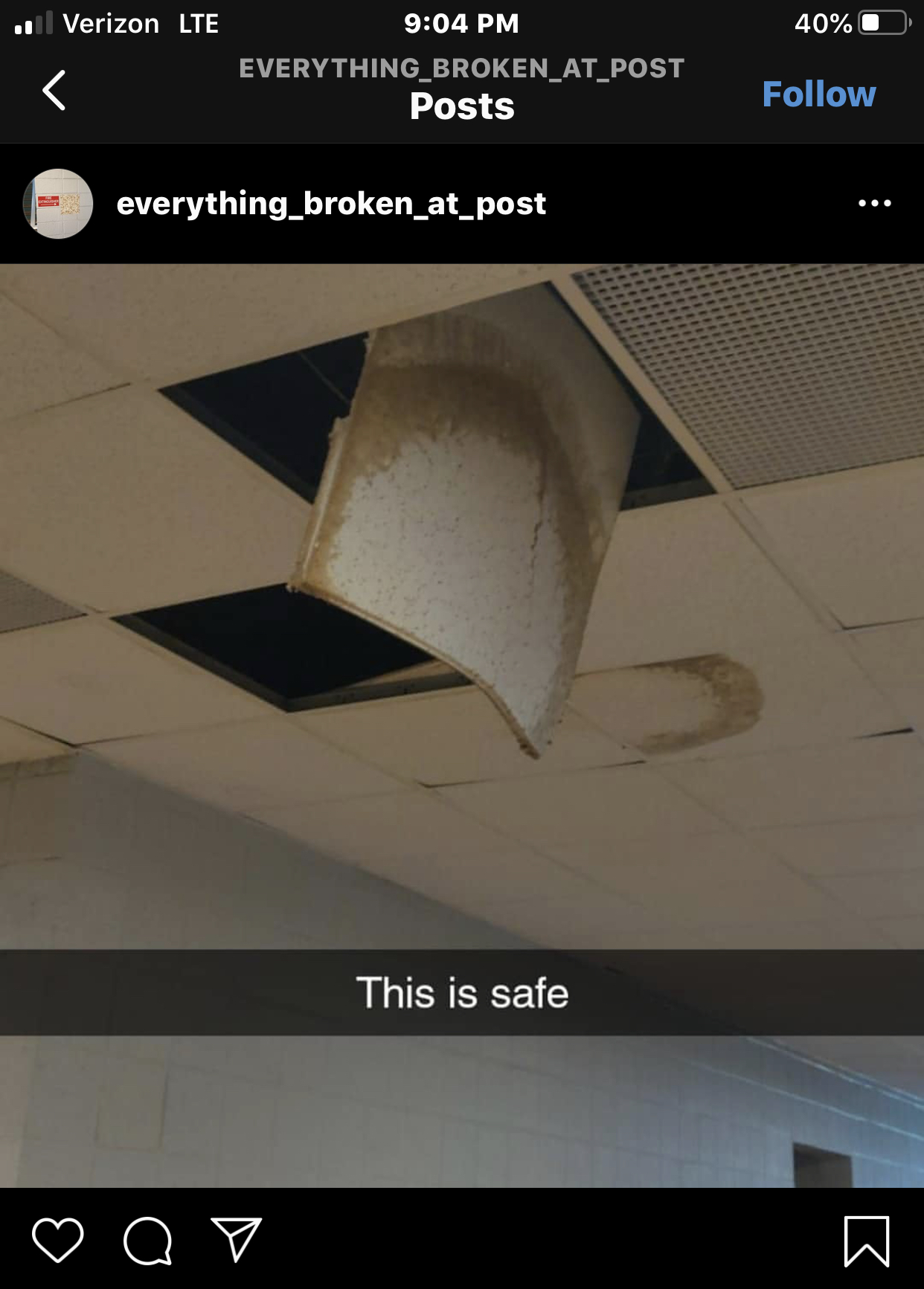 An Instagram account called “@everything_broken_at_post” has grown in popularity since it was created in 2018. Followed by nearly 1,000 people, the page is filled with pictures and videos of things in need of repair or attention on campus.

The 219 posts on the page were submitted by students who send in pictures of things they encounter including leaky ceilings, broken furniture and moldy food. The account’s administrator then posts them anonymously.

Amanda Mahoney, a junior film major, said she never submitted a photo but has “definitely seen things that she could probably send in to the page.”

Some of their more popular photos include a mouse that entered a dorm room through an open ceiling, shattered windows in classrooms, and many broken classroom chairs, all of which were discovered by students.

The school’s facilities department is aware of the page, and they’ve used the account as a tool to help improve the work order system, according to Roy Fergus, executive director of facilities.

“We survail the page, and attach work orders,” Fergus said about items posted to the page that clearly need attention. “When someone says they saw this on Instagram we can ask someone to say ‘Do we have that in the system?’ and if not, why not.”

The account goes through phases of posting, and occasionally taking breaks from providing new content. As of the 2019-2020 academic year, posts appear more often, indicating its growth in popularity and that students are submitting more frequently. While earlier posts from the anonymous account owner used to average around 70 likes, they now receive over 100. Accounts from various majors and extracurricular interests, including alumni, follow the page. Some comment in agreement with each other about disappointment in the school’s upkeep; however, there is the occasional comment defending the school in which a link to submit a work order is provided.

For example, the account “blu_eyed_baby” left a comment which read, “If only the students would stop deliberately breaking things” followed by the hashtags “#patheticployforattention” and “#growup.”

While work orders are an available solution to all students on campus, many of the problems go straight to Instagram before being reported to the facilities department, according to Fergus. Some students may skip over the work order process because they’re only drawn to the page for its comedic appeal rather than its ability to help them get items repaired more quickly.

With the exception of a few, a number of students take the page seriously, and the cost to attend the school is brought up often in the page’s commentary.

“The overall quality of LIU as a whole isn’t worth the steep price tag,” Jordan Goldsher, a senior business administration major, said.

Mahoney had a similar thought to Goldsher in reaction to the posts, but geared her frustration more toward the school’s administration.

“The page is a big slap in our faces, knowing that all that bad stuff is going on and no one is really doing anything about it,” she said.

The account presents the condition of campus dorms and classrooms as what some may deem as unlivable and dangerous. Students like Mahoney want to take pride in their university.

“I would like for LIU to take some extra steps in finding better ways to make sure these issues get reported to the school and acted on immediately instead of just posted to some social media page,” Mahoney said.

But some students forget to consider that the facilities crew works diligently to maintain campus conditions. Joseph Aberasturi, a senior computer science major, took note of this.

“It is a shame to see all of the mishaps around the school, but I don’t think it should signify that the school doesn’t do a good job to maintain the campus. I always see the [staff] working hard around here,” he said.

Fergus’ outlook on the page wasn’t negative, as he views it as an alternative form of communication from the students. “If something is a real issue of safety or otherwise, it means we need to adjust, or correct our approach to it,” he said.