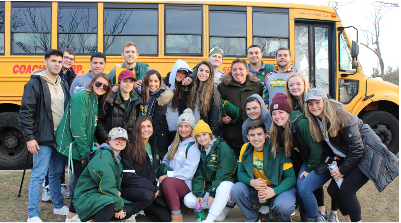 Three fan buses drove students from to Adelphi University to cheer on the men’s lacrosse team as they went up against Adelphi Panthers on Wednesday, March 21

The fan buses “provide an opportunity for all students to participate in college athletics, whether it is as an athlete or as a spectator, and to cheer on their and their team,” Dean of Students Michael Berthel said.

At 6 p.m. More than 35 gathered outside Hillwood Commons to board the fan buses that would transport them to the game and back. Members of Campus Life offered students free dinner, t-shirts sweat-shirts to the first 100 students to reserve spots on the buses

Transport services have been provided to post-season and championship games in the past, but because of men’s lacrosse recent success against the defending national champions Merrimack College on March 9, the interest in the team has grown.

“There is a lot of energy around men’s lacrosse because of their tremendous success,” Berthel said. “We are looking to tap into that excitement around it and provide an opportunity for students to cheer on their fellow student-athletes and to make sure the players know that their peers, staff faculty support them.”

The game against Adelphi was a perfect opportunity to build on the hype around the men’s lacrosse team, said, because of the rivalry and competitiveness between the two teams. “It’s always great when the stands are filled and people are cheering you on. I think that helps with the overall success of the team,” he said.

Emily Tirado, a freshman health science major, with the fan buses and think it was a great way for the students to get together and support the men’s lacrosse team. “I really liked it! I think it’s important that we support our sports teams like this. It really makes all of us one big family,” she said.

The fan bus concept will continue and be applied to other sports too depending on the team’s success and their game schedule, according to Berthel. “We can’t make it to every game obviously but we try to tap into when we see a team is doing well and there is energy around a sport,” he said. “For it’s all about providing for students to feel like they are a part of the success the team is having and that community. We are obviously proud of them and what they are accomplishing and we want to make sure that we continue to them.”