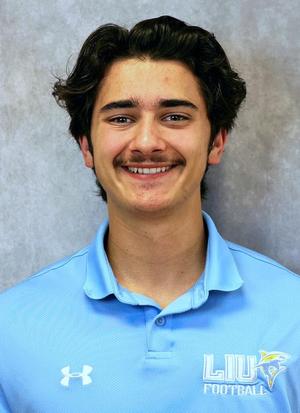 On Saturday, Oct. 29, the LIU Sharks won their first game of the season, defeating the Duquesne Dukes 50-48 in double overtime on the road in Pittsburg, PA.

It was the first career start for freshman quarterback Luca Stanzani following the Sharks’ 7-game losing streak to start the year. The Sharks got off to a slow start, trailing 14-0 early in the second. However, the Sharks responded with 28 unanswered points to take control.

It all started with a late rushing touchdown by Stanzani in the second quarter to get the Sharks on the board. The second half was a wild one. To open up the 3rd quarter, the Sharks scored on five plays, capped off by a 64-yard touchdown pass from Stanzani over to Davon Wells to tie the game at 14. Three plays into the Dukes’ next drive, Sharks’ Defensive Back Caleb Nartey got a 36-yard pick-six for his first career interception to put the Sharks ahead. Three plays into the very next drive, on a mirror image play, Stanzani connected with Wells again for a 58-yard touchdown.

The Dukes would not go down without a fight, scoring two minutes later on a rushing touchdown by Quarterback Joe Mischler to cut the deficit to 28-21. After a slow first half, Sharks’ Running Back Pat Bowen exploded for a 44-yard rushing score to put the Sharks back ahead by two scores. The 4th quarter was all Duquesne, with Joe Mischler putting together two drives capped off by 13-yard scores from two separate receivers, sending the game into overtime at 35-35.

The Sharks’ set the tone with a 12-yard score from Stanzani over to Tosin Oyekanmi on his first reception of the day. The Sharks held the dukes to three yards on the first three plays of the Dukes’ drive. However, on a 4th & 7, Joe Mischler saved the game on a do-or-die 22-yard score to Joey Isabella to send the game into double OT. The Dukes scored first with an 11-yard score from Mischler to Janneh Abdul but were not able to connect on the 2-point conversion as required by NCAA overtime rules.

This set up the Sharks with a chance to win it after Stanzani connected on a 14-yard score on 3rd down to Pat Bowen to tie the game at 48. Finally, after a hard-fought game on both sides, Luca Stanzani connected with Micheal Love on a fade route for the 2-point conversion to end the game.

Stanzani was named NEC & National FCS rookie of the week for his performance, which included going 22-27, with 5 total touchdowns and 390 yards from scrimmage.

Wells had 7 receptions for 199 yards, more than half of what he’s had in his entire career up to that point. Sharks’ Safety Victor Nelson Jr. had two interceptions, giving him six on the year, making him the FCS leader.

Sharks Defensive End Eric O’neil was named NEC Defensive Player of the Week for his performance, which included 9 tackles, 5 for a loss and 2.5 sacks.

Soon after Head Coach Ron Cooper joined LIU in early January and brought his staff together, Stanzani claimed in an interview with WCWP that Offensive Coordinator Kort Shankweiler got him on board.

“Coach Kort offered me mid-February. They made it really known that they wanted me here, and they wanted to get me up as soon as possible for my visit. So we made that happen, and I’ve loved it ever since,” Stanzani said.

After playing off the bench in a few of the Sharks’ losses early on, Stanzani knew he just had to stay patient to play in each game when the opportunity arose.

“I just knew that I always had to be prepared. That’s what the coaches tell me, just be prepared, So when my moment came later in those games, I just had to be ready, and I was,” he said.

Stanzani knew going into the game in Duquesne that this would be his opportunity to get his first start.

“It’s exciting. It’s what I worked for. I came here to play to show what I got, so when Coach Cooper told me, I was definitely thrilled,” he said.

Stanzani knew he couldn’t get over anxious after being down 14-0 early and had to continue fighting and putting together good drives.

“We just had to believe. We’ve been in situations where we’re down, some teams start to give up a little bit, but we knew that if we just kept going and kept fighting, we would come back, and we did,” he said.

Stanzani believes in himself and understands there is still room for improvement.

“Everything can always keep getting better, obviously, but as a freshman, I can mature physically. There are certain things in the pocket that I can do better: getting timing better with receivers and getting relationships with them better can improve a lot,” he said.

Stanzani has high hopes for himself and the team going forward.

“I’d like to just win out and do as good as we can in these last three games and build that momentum going forward into the next season and hopefully win a lot of games next year,” he said.

In an interview with WCWP, Head Coach Ron Cooper acknowledged he could not have been happier with his team after battling the whole way.

“We had a very excited team. They’re fired up. When you win a game like that on the last play of the game, it usually makes it a little bit special,” he said. “It’s tensed up all game, going back and forth, they’re ahead, we’re ahead, you have to win in overtime. We had to go for two, and they had to go for two. So our guys responded, but they were excited and played well.”

After giving Stanzani the starting role for the week, Cooper is ready to trust his young quarterback.

“He did a great job as a true freshman, only 18 years old, playing in his first Division I college football game as a starter. Last year at this time, he was getting ready for the playoffs in high school, and he joined us this summer, and he was prepared for it,” he said. “He’s talented, the question we didn’t know about him was how he was going to perform in a game environment. He practiced well, and he’s done everything we’ve asked. He’s learned the playbook, he’s learned the scheme, and he was talented, but he stepped in.”

Stanzani got right back to where he left off the following week, beating Central Connecticut State University 29-20 at home on Saturday, Nov. 5.

Stanzani had another high performing game, going 19-32 in his second career start, with 284 yards from scrimmage and a touchdown.

It was a 59-yard touchdown pass from Stanzani over to Oyekanmi to finish the first quarter that put the Sharks ahead 13-7, and they did not look back from there.

Sharks’ Kicker Micheal Coney connected on three straight field goals to add to the Sharks’ lead in the 2nd and 3rd quarters to solidify the lead.

After two touchdowns in the 4th by the Blue Devils to make it a competitive game, it was Safety Ayinde Johnson who sealed the deal for the Sharks on defense with a 40-yard pick-six for his first career interception on the Blue Devils’ final drive of the day.

The Sharks are now 2-7 on the season with two more games left to play. The Sharks will look for Luca Stanzani to continue to dominate on the field while preparing himself to lead the program next year.

The Sharks host the Stonehill Skyhawks on Saturday, Nov. 12 at 1 p.m. You can listen live on WCWP and the Wave.