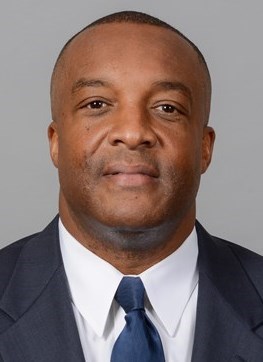 A veteran coach with decades of experience, Ron Cooper, will take the helm as the Sharks’ head football coach for the 2022 season.

Cooper’s college football career started as a player for Jacksonville State. Upon graduating, he became a Graduate Assistant at Appalachian State and Minnesota.

His first few positions throughout the 1980s and early 1990s include his time as the defensive coordinator at Murray State and the University of Nevada. He was also an assistant coach at Notre Dame from 1991-92. In both years, Notre Dame made the Orange Bowl and won it once.

Cooper has had several head coaching positions in collegiate football and has coached under some prestigious Division 1 programs.

Cooper’s first head coaching job was with Eastern Michigan in 1993. Throughout the 1990s, he also landed head coaching jobs with Louisville and Alabama A&M. At Alabama A&M, he helped transition the program from Division II to Division I and led the team to a 5-2 record in 2000, leading the Southwest Athletic Conference (SWAC).

After leaving Alabama A&M in 2001, Cooper was named to various positions on the defensive side of the ball for schools in many powerhouse Division I conferences. He spent one year as the defensive backs coach for the Badgers of the University of Wisconsin in 2002 before becoming Mississippi State defensive coordinator for a year in 2003.

While at South Carolina, Cooper helped lead the Gamecocks to three bowl games, including a victory in the Liberty Bowl in 2006. While at LSU, Cooper was a part of the program that made three straight bowl games while adding an SEC championship to his resume in 2011.

Cooper moved his way up the ladder from the defensive backs coach of Florida International University to interim head coach in 2016.

After leaving Florida International, Cooper was a defensive backs coach for two more SEC schools, Texas A&M and the University of Arkansas.

His final position before joining LIU was as an analyst for the Crimson Tide of the University of Alabama in 2021 under legendary collegiate head coach Nick Saban. Under this role, Alabama won the SEC championship and made it all the way to the College Football National Championship game.

Cooper claims he has had a long-time friendship with LIU’s Athletic Director Bill Martinov, which was a key factor for him when deciding to take charge of the football program here at LIU.

“The athletic director and I have known each other for several years. We started off our early years of coaching in our early 20s, and then we met up again when I went to the University of Notre Dame. He was a strength coach, and I was the secondary coach,” he said. “We stayed in touch, and when the opportunity came about, he and I talked, and then I talked with Dr. Kline, and we had a great conversation and I felt like the commitment was totally made to Long Island University football. It was an exciting time. We decided to venture out and do it.”

Through Cooper’s experience at both the collegiate and professional levels, he acknowledges that there is a different approach to coaching the players at different levels.

“In college, you have to recruit. You get a man at 17, 18, 19 years old as a freshman. You get to know them when they’re in high school, and then you watch them mature from their freshman year through their senior year in college. You get a chance to nurture and teach him techniques and fundamentals, help them become young men and to grow into mature, responsible adults. When you go to the NFL, those guys are already mature adults, you’re coaching grown men who are feeding their families based on how they’re playing on the field, so there is a difference,” he said. “When it comes down to football, you still gotta teach them how to block, tackle, run, catch and install plays on offense and defense. All those things are still the same, but the young man that you’re dealing with in college is right out of high school. When I went to Terry Buccaneers, Ronde Barber was still there. Ronde was 37 years old, playing his last couple of years, so there is definitely a difference.”

Cooper has nothing but great things to say about the student-athletes and coaching staff he has worked with over his short time so far with LIU.

Cooper definitely plans to recruit more athletes over the coming months, but believes the group they have now will be the core they run with in the near future.

We are definitely recruiting. We got a late start, but we’ve come out strong, and we will look to sign a few more student-athletes to scholarships, but the main look of our team on what we will do this year, they’re already here on campus. We’re working with about 80 guys every morning. The first group starts at 6 am, and we’re in here with them. They’re lifting, running, getting bigger and stronger. It gives us a chance to see each player’s work and what their attitude is like,” he said. “We’ve got them early in the morning, so we know they’re going to bed at night to be able to get up to be here. The door opens at 6 for stretching. I’ve been totally impressed. Since I’ve been here in January, we’ve had no unexcused absences, so that means that the guys wanna be good, they want to do something special and they’re buying in.”

Cooper will look to have an explosive first season with LIU and then continue to build on that for long-term success with the program.

“We would like to have a winning season this first year. We’d like to have success winning at home. I’d like to aid the university in filling up that stadium and getting the people that are around this area interested in Long Island football and that’s gonna take putting a good product on the field,” he said. “I want the students involved, sitting behind our bench just like the other places I’ve been and other teams can’t really hear because students are making noise and trying to make it a fun atmosphere in that stadium out there, find a way to win all the home games, find a way to win on the road and have a winning season.”