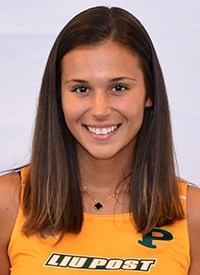 Sabina Muharemovic, senior nursing major, started the program in the spring 2020 semester because she is vegan and learned a lot in her health classes about how meat is often unethically produced in the United States.

“Usually our dorm has programs that have to do with food, like pizza for the entire resident hall,” Muharemovic said. “I don’t even eat pizza, so I wanted to make a program that’s a reflection of me too.”

After considering different programs over the course of a few weeks, Muharemovic started sending photos and information about vegan and vegetarian options on campus to a group chat which included the four other resident assistants and resident director of Post Hall, Trey Pogue.

The group supported Muharemovic’s quest for plant-based options on campus, and began sending photos of their own meatless meals to their group chat.

“It’s hard to adhere to a meat-free diet with our dining plan options at LIU,” Muharemovic said. “The group chat helped me think of having meatless Mondays in our dorm.”

Muharemovic then went on social media to post the health, financial and environmental benefits of going without eating meat one day a week.

According to NorthShore University Health System, a meatless Monday can lower the risk for colorectal cancer, obesity, heart disease, and type 2 diabetes. Additionally, eating less meat will lower the amount of greenhouse emissions involved with the transportation and production of livestock produce.

Muharemovic created posters for Post Hall to promote her program and spoke in person with many of the residents about the benefits of meatless Mondays. So far, the response was positive.

“I think that it’s a great way to … introduce people to the lifestyle of eating like a vegetarian without it being a hassle to anyone,” vegetarian Sarabeth Schiff, freshman musical theatre major, said. “It’s hard to do, and it’s a good way to start eating a green-based diet without forcing yourself to completely dive in.”

Muhavemovic wanted to advocate for meatless Mondays without pressuring people to adopt the same eating habits as full-time vegans or vegetarians.

“Sometimes veganism is a controversial topic,” she said. “I just wanted to educate people and not force the vegan ideology.”

“Many people think you have to go vegetarian or vegan to help the environment, when really just cutting out meat and dairy products for a day or two every week does so much more than doing nothing,” he said.

Spreading the message of meatless Mondays is important so more students across campus can get involved. Although this is a program for Post Hall, anyone can participate.

“I have been a vegetarian for nine years so I always do meatless Monday, but I love the awareness [the program] is raising for a more environmentally friendly and healthy diet [for the students],” Sporrer said.

Future plans for the program include expanding it across campus and potentially giving out prizes to devoted meatless Monday participants.